Banding was carried out on the banks of the Orara River, at Coutts Crossing by three banders, with one assistant.  Banding has been carried out in the Coutts Crossing area since 1985 with a total of 2126 individuals of 96 species having been banded to date.


Forty-six birds of nine species were mist netted on the two days, nine being retraps.


Two Golden Whistler retraps were very interesting as they had been banded as grey female type birds on 26/05/2012, one with bright yellow underwing coverts, yellow vent, and with scattered yellow patches on belly and tibia and with black feathers around the eye.  It was aged and sexed as a 3+ male at that time.  When retrapped on 26/04/14 it was in full adult male plumage with its upper tail being about 2/3 black.  The tail wing ratio suggested that it was of the subspecies youngi, found in Victoria, Southern NSW and the western slopes of NSW.  Birds in Queensland have completely black tails and local Coutts Crossing birds would be expected to have almost fully black tails.


The other retrap Golden Whistler was in grey, female type, plumage when banded but had a bright yellow vent and undertail coverts, with yellow feathers on its breast, tibia and near the alula (underwing).  Although I was aware that old adult female Golden Whistlers can have some yellow feathering in these areas I thought that it was most likely an immature male.  Its markings hadn’t changed in the nearly 2 years between being banded and retrapped so it was obviously an old adult female bird.  I have heard that old domestic hens can start to assume male characteristics as the gonads deteriorate with age.  This may also happen in birds like the Golden Whistler.

One Black Swan was observed on the Orara River along with 5 Pacific Black Ducks.  An Azure Kingfisher was foraging along the Riverbank.  A Brown Cuckoo-Dove was calling most of the weekend.  This species is uncommon at this site.  A flock of 100+ Straw-necked Ibis flew overhead flying east.  A pile of feathers on the ground was the only indication that there had been a Russet-tailed Thrush in the area.  It had most likely been killed by an avian predator such as a Brown Goshawk.

Posted by Greg Clancy Ecologist and birding guide at 15:07 No comments:

On June 17 Val and I visited Coffs Harbour to see our grandson who was turning 6.  Koby is so keen on wildlife and he adores his granddad.  We share some wonderful times together and he is very skilful in spotting hard to see birds.  On a recent bird camp he drew my attention to a bird high up in a dead tree on top of a hill.  When we stopped and viewed the bird through binoculars and a spotting scope it was found to be a Pallid Cuckoo, the first for the camp.  He was also the first to spot a group of Ground Cuckoo-shrikes on the same camp.

I had heard that there had been a recent sighting of a Powerful Owl at the Coffs Harbour Botanical gardens so Val and I investigated the area while we waited for school to finish.  Val found a broken off feather of an Owl on the ground but it took me some time to locate the bird perched high in the upper foliage of a Turpentine Syncarpia glomulifera tree.  I was very satisfied as this was the first Powerful Owl that I had seen (and photographed) during daylight hours.  I have observed a few at night while spotlighting and have heard the call numerous times during fauna survey work but this was a treat.  A pair of Powerful Owls had nested in or near to the Botanical Gardens last year and I visited the site in an attempt to see and photograph the adult pair and their two young then but I missed out by a few days.  They had moved on.  Apparently Coffs Council's ecologist is attempting to locate the nesting tree this year.


Not so hard to find was an adult Koala curled up in a fork of a Swamp Mahogany Eucalyptus robusta some 100 metres or so from the Owl perch.  It began to feed towards late afternoon, munching of the eucalypt leaves.  Both the Owl and the Koala were quite high up in trees and were partly obscured by foliage making photography difficult.  I did mange a few shots of both but would like better, closer, shots of them at some time in the future. 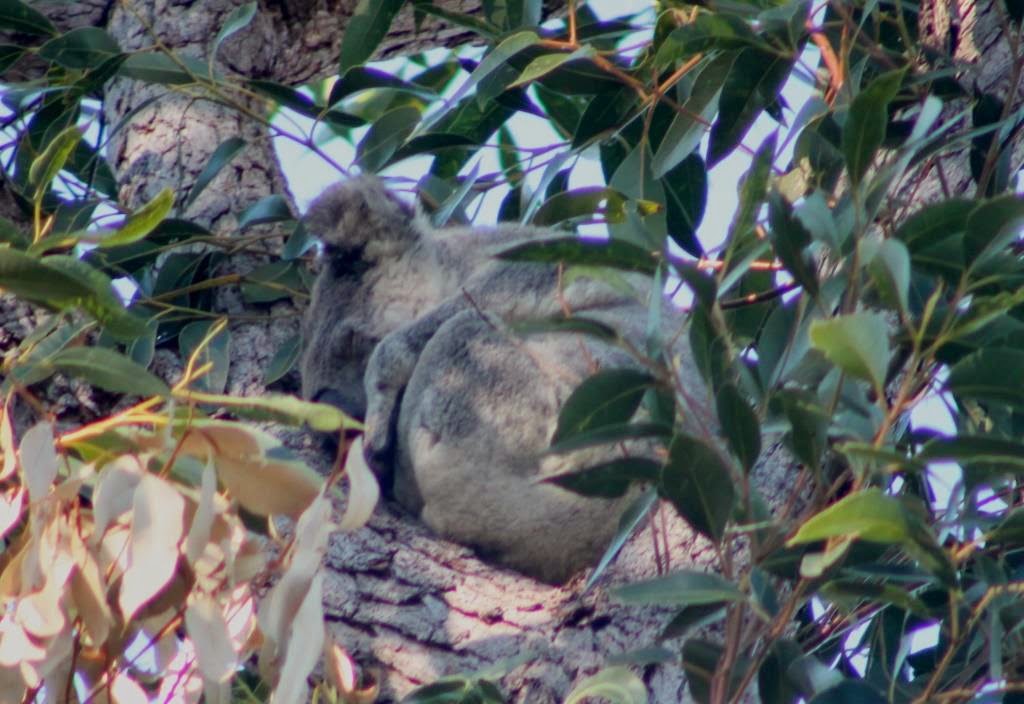 Easier to photograph was an adult Australian Brush-turkey that was scratching around in a mound of mulch.   A second bird arrived and there was the usual bickering that is common with this species.


After school finished we showed the three grandkids the Owl and Koala and also showed them to some overseas visitors from Poland and Asia.  They were all very impressed.   A pair of Rainbow Lorikeets was inspecting potential nest hollows in tall Blackbutt Eucalyptus pilularis trees.  These birds are so common as to be virtually ignored by serious birdwatchers but when you stop and observe them they are indeed beautiful creatures.


Posted by Greg Clancy Ecologist and birding guide at 13:42 No comments: