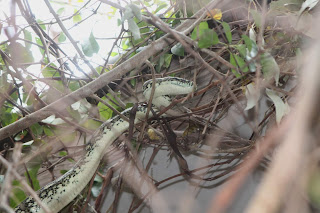 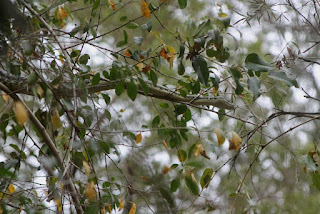 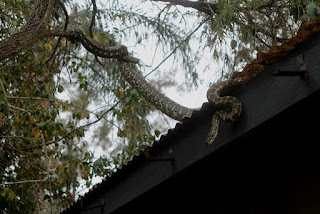 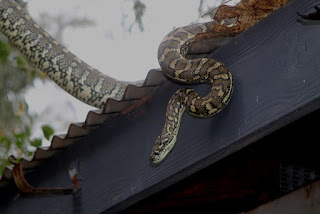 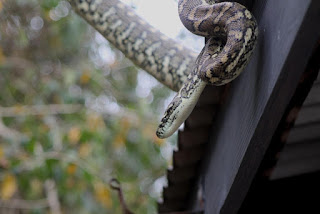 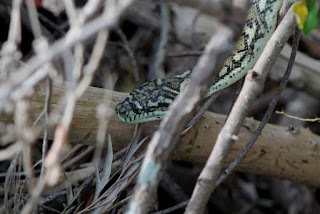 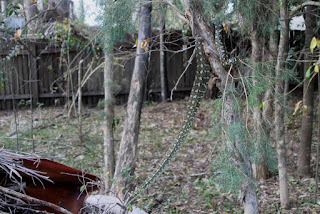 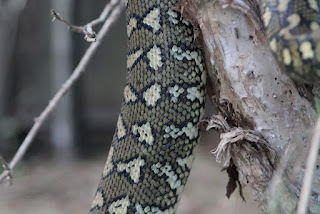 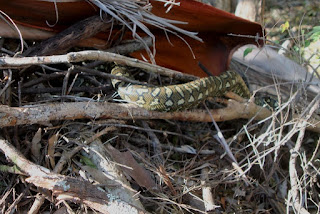 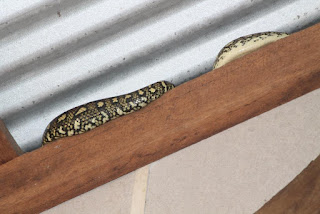 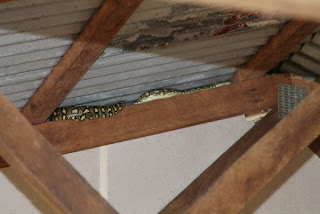 Yesterday three adult White-headed Pigeons visited our 'jungle' backyard at Coutts Crossing.  They are irregular visitors and have nested in the yard in the past.  The removal of most Camphor Laurels in the local area has not seen the demise of these birds as there are plenty of rainforest trees, shrubs and vines in our yard and the local bushland. 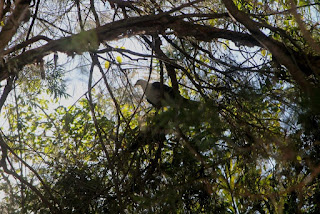 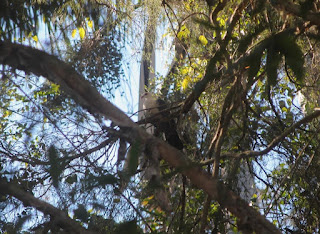 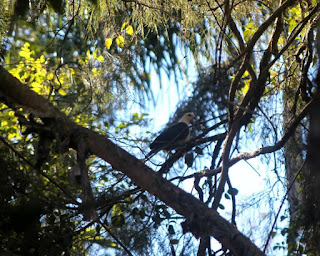 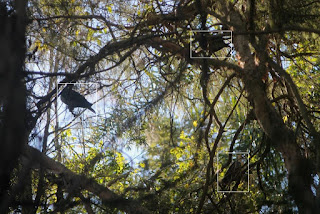 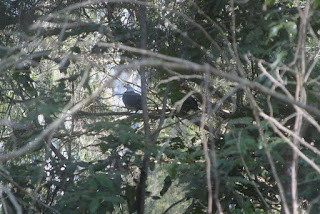 Posted by Greg Clancy Ecologist and birding guide at 12:47 No comments:

The Australian Painted Snipe is a very rare shorebird that suddenly appears in areas where it has not been seen previously or not for many years.  Its movements are not well understood and if there is a pattern to them it is not apparent.

Following an outing of the Clarence Valley Birdos to a local property on Romiaka Island, near Yamba, north coast NSW, on Saturday January 20, Frank and Wendy Ball, of Armidale, called in to view the birds at a wetland on James Creek Road, Harwood.  They observed 10+ Red-kneed Dotterels, a Glossy Ibis and an unidentified bird with a rufous-brown head that later turned out to be a colourful Latham's Snipe. However the find of the day was a female Australian Painted Snipe.  They 'phoned Jock and Marion Rose who had never seen one before and it wasn't long before the four of them had the snipe in view.  They also 'phoned me to let me know the news.


Val and I were back in the area on the Sunday January 21 for a meeting so called in at the wetland on the way home.  It was very hot and although we saw the colourful Latham's Snipe, the 7+ Black-fronted Dotterels and other more common waterbirds, the Painted Snipe eluded us.  So the next day, January 22, Warren Thompson, Val and I headed off late in the day to have another try at observing them.  As we were about to leave home I had a 'phone call from Gary Eggins.  He and his brother, Darryl, had seen TWO Painted Snipe at 8.30 a.m. that morning.  We arrived at about 6.30 pm and waited and waited and at about 7.30 pm the two Painted Snipe emerged from the vegetation at the far side of the wetland.  I took some photos but at that distance it was hard to focus.  The brightly coloured Latham's Snipe and an adult Buff-banded Rail also emerged from the reeds.  The Painted Snipe did not seem to tolerate the Rail and made defensive wing actions towards it.  It moved away.

Other local birdwatchers visited the site and reported that the birds were closer to the road than when we had seen them earlier so we decided to try again on January 27.  It paid off with us getting closer views and better photographs.  Other birdos arrived as we were about to leave so I showed them where the birds were hiding.

This was only my fourth observation of this rare species.  The first two were in the early 1970s.  The late Bill Lane and I banded one each of different sexes at Wooloware Swamp near Cronulla, in Sydney's south.  I also saw two that were caught for Taronga Park Zoo at McGraths Hill Sewage Works, near Windsor while we were catching and banding Latham's Snipe. On 19th January 2007 Maureen O'Shea and I visited a property at Gilletts Ridge with the land owner who wanted me to see these 'strange birds'.  As we were driving to the paddock where he had seen the birds an unidentified bird flew across in front of our car in an area of Swamp Oaks and grass.  I was keen to check it out but the landowner wanted me to look for 'his' birds so I hopped into his miniature Suzuki 4WD and off through the paddock we went.  I suggested to Maureen that she might like to check out the 'strange' bird while we were gone.  We didn't find the birds that Chris was chasing but after some discussion I realized that he was talking about some Latham's Snipe.  When we returned to where Maureen was waiting she had a big grin on her face.  She said 'guess what I have found, a Painted Snipe."  So the unusual bird was an Australian Painted Snipe.  At the time we thought that it was an adult male but after examining the photos a few days back I am not so sure.  It may well be a juvenile female. I returned to the site a couple of times in the ensuing days and managed to photograph the bird on 20 January.  It was also seen by Val, Warren Thompson and Russell Jago.


The only other Clarence Valley record that I am aware of is an observation by Russell Jago of one at Southgate some years back.


Posted by Greg Clancy Ecologist and birding guide at 15:54 No comments:


Banding was carried out at the northern end of the Nature Reserve, off the Iluka Bluff Road, on 19 & 20 August and at the southern end, off Long Street, on 21 August.


Seventy-three birds were mist netted over the three day survey.  Seven were retraps, having been banded previously, and sixty-six were banded as first time captures.

The seven retraps comprised two Rufous Fantails, one carrying colour bands from Lindsey Nietmann’s project, two Eastern Yellow Robins, one Golden Whistler and a Large-billed Scrubwren retrapped twice.  All were originally banded at the site of recapture.  Their banding and retrap details are as follows:


Rufous Fantail project with two yellow colour bands on the left tarsus and a numbered alloy band on the right tarsus.  Retrapped by Warren Martin on 20 Aug 2017, over 2 years 8 months after banding.


Interesting records were of Rose-crowned Fruit-Doves calling in the Nature Reserve and a Noisy Pitta and a Russet-tailed Thrush were seen along the Woody Head Road.  A Russet-tailed Thrush and an Emerald Dove were heard calling at Iluka South on 21 August.  The Emerald Dove used to be regularly recorded at Iluka and Woody Head but records have been scarce in recent years.  A road-killed Southern Boobook was collected from the Bluff Road intersection on the Iluka Road as we left on the Monday.

Posted by Greg Clancy Ecologist and birding guide at 15:42 No comments:


One hundred and eleven birds of 22 species were mist netted over the five day session.  Seventeen were retraps, having been banded previously.  Ninety-three were banded as first time captures.

One of the two Grey Fantails banded was of the Tasmanian race based on its tail to wing ratio while the second was in the overlap zone of measurements.


Three Glossy Black-Cockatoos, a pale morph Little Eagle and a Crested Shrike-tit were interesting observations near the residence at Dandahra Picnic Area.  A Rufous Scrub-bird was heard calling at Surveyors Gully on December 5 & 6.  A Crested Shrike-tit and two Musk Lorikeets were also present at the same location.  A Red-bellied Black Snake decided to join us at the banding site in Washpool National Park on December 08.  Three species of skink were also observed - the Cunningham's, White's and Grass Sun-skink.

Posted by Greg Clancy Ecologist and birding guide at 19:02 5 comments: