In search of the elusive Rufous Scrub-bird

The Rufous Scrub-bird is one of the most elusive birds in the world.  Early collectors found it very difficult to secure specimens for museums as it was very difficult to shoot.  The bird moves through the leaf litter like a small mammal.  Because of its reclusive habits it has a very loud call which allows it to advise that its territory is occupied.  For this reason many bird watchers have heard a Rufous Scrub-bird but have not seen one.  This was the situation when last Friday I was searching for this species with two Queenslanders, Judy and Rae at Gibraltar Range National Park.  Although the species is not breeding at this time of the year I had expected to at least hear it, even if we couldn't see it.  It calls mostly during the spring breeding season but I have heard the species call throughout the year.  We visited four territories, the first close to the Gwydir Highway.  This was our regular Twitchathon bird but wasn't calling there at Twitchathon time although it was the prime time for calling then.  We were disappointed again on Friday as it was silent.  I tried some limited call playback but although a number of other species were singing their hearts out there was no Scrub-bird call to be heard.  On to the site where we did hear it on the Twitchathon and again no Scrub-bird calls.  The third site involved a short stroll along a walking track near Mulligans Camp and we were distracted by a good number of birds, including Brown and Striated Thornbills, Brown Gerygone, Golden Whistler, New Holland Honeyeater and Musk Lorikeet. A flock of five Topknot Pigeons flew high above the canopy obviously searching out a fruiting rainforest tree.  We arrived at the Scrub-bird site and I found an edge with the correct type of vegetation structure so played the call.  We heard a faint response but it was hard to distinguish it among all of the other calls, including those of the Eastern Whipbird, Brown Gerygone and Eastern Spinebill.   Then I glimpsed it, a small brown flash, checking out the playback speaker.  "Over here" I beckoned but it was too late.  It had disappeared into the ether and didn't make a comeback.  We had great views, and photo opportunities, of an adult Black-faced Monarch at Mulligan's Camp.  On to site four which involved a short walk from the road down to a beautiful forest dominated by very tall Messmate Stringybarks.  The Messmate was the first eucalypt species described by botanist, Charles-Louis L'Heritier de Brutelle, a French minor aristocrat, in 1788 (Australian Eucalypts by Mervyn Millet 1969).  On our return trip we checked out the second site again but still no Scrub-bird.  I did find a Yellow-throated Scrubwren nest with two advanced nestlings though.  The trip down the Range resulted in views of a number of Satin Bowerbirds, a couple of Bassian Thrushes and some Brown Cuckoo-Doves.  Although Judy and Rae didn't see the target species they said that they really enjoyed the morning and that it is a wonderful area.  I would have to agree with them.

Posted by Greg Clancy Ecologist and birding guide at 20:42 2 comments:

Family commitments saw me spend the weekend in a cabin at the Park Beach Holiday Park at Coffs Harbour.  Not really being one for crowds it was a little hard to take but the special time that I had with three of my nine grandchildren made it worthwhile.  Koby, the five year old veteran of two Gould League Bird Camps, was very keen to check out the field guide and always presents me with feathers that he collects.  This time it was a Magpie-lark tail feather.  The only other birds that were seen or heard were common species including the Masked Lapwing, Noisy Miner, Blue-faced Honeyeater, Silver Gull, Torresian Crow and  Eastern Koel.  I heard a number of individuals of the introduced Asian House Gecko around the park.  A late afternoon walk to Park Beach allowed views of Muttonbird Island, Little Mutton Island, Split Solitary Island and South Solitary Island.

Posted by Greg Clancy Ecologist and birding guide at 17:25 No comments:

On December 4 2012 I heard a Southern Boobook calling at night near our home at Coutts Crossing, north coast New South Wales, Australia.  On December 6 a pair of Little Friarbirds was jumping around on the branches of a Macadamia Nut tree in our backyard, harassing an adult Boobook.  As I went to investigate the commotion I flushed the owl which flew to a tree in our front yard.  The Little Friarbirds were joined by some Blue-faced Honeyeaters, a pair of Magpie-larks and some Noisy Miners.
It, or another adult, was also present on December 9 roosting in a Queen Palm next to our backyard with Australian Magpies, Grey Butcherbirds and Torresian Crows all nearby calling in alarm. A single adult was present in our yard almost daily from December 19 to 26.  Then on December 31 there were two adults roosting in the thick foliage of the paperbarks in the backyard.  The noisy activity of the sentinel honeyeaters drew my attention to a Forest Red Gum Eucalyptus tereticornis in the backyard to the rear of our place.  There I observed a fluffy juvenile Boobook.  It was joined 20 minutes later by a second juvenile. 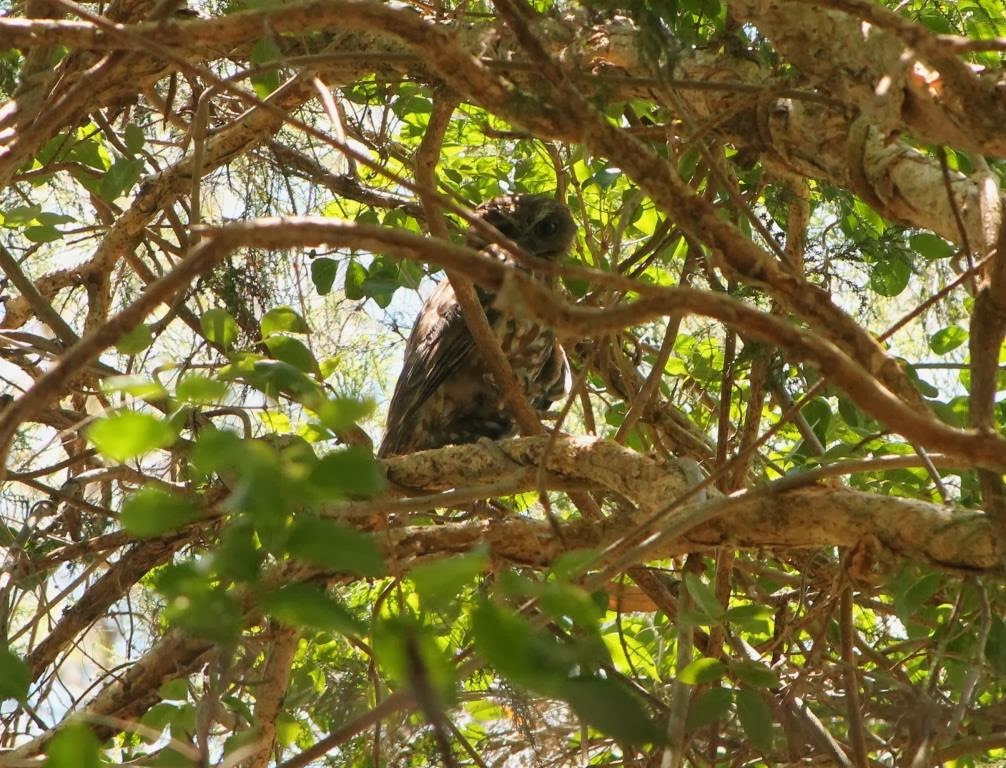 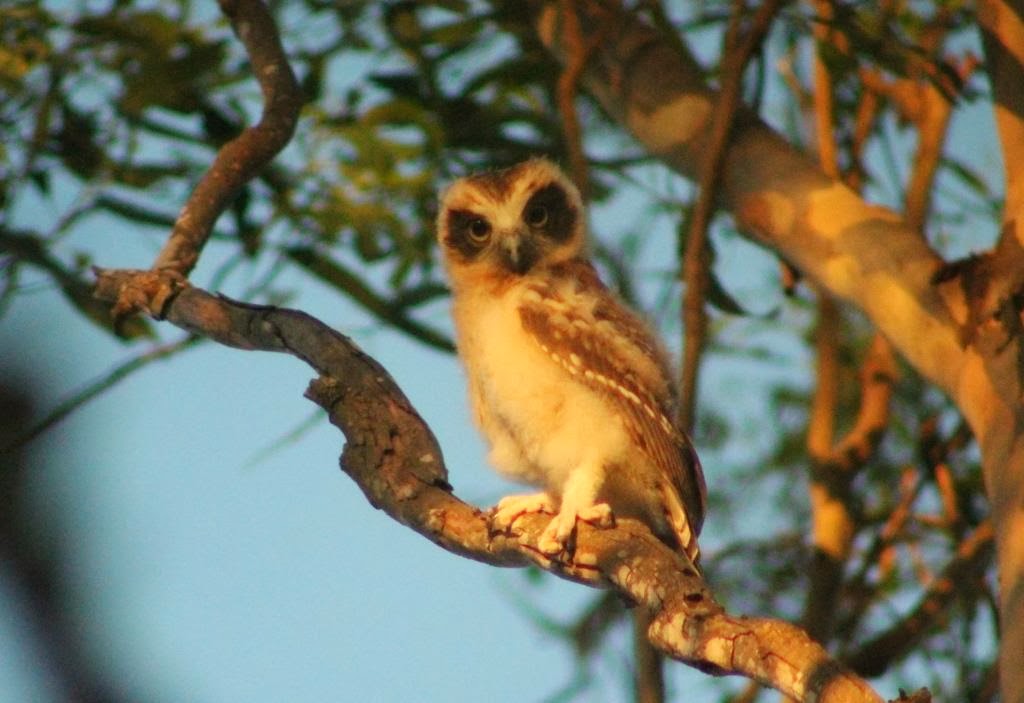 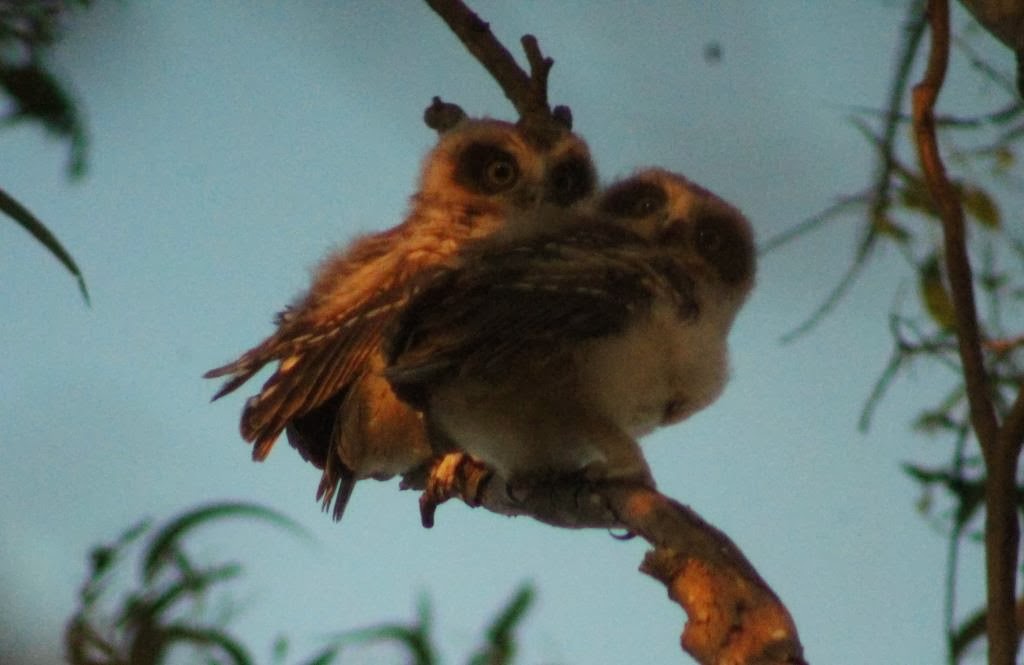 Two juveniles on 31.12.12
On December 3 2013 the Boobooks were back.  Three birds, an adult and two downy juveniles, arrived in the yard at 1955 hrs.  The juveniles were making insect like sounds and this prompted the adult to flew over the house and into nearby bushland, obviously to hunt for food.  I tried for a couple of photos but the light was poor so wasn’t that successful. 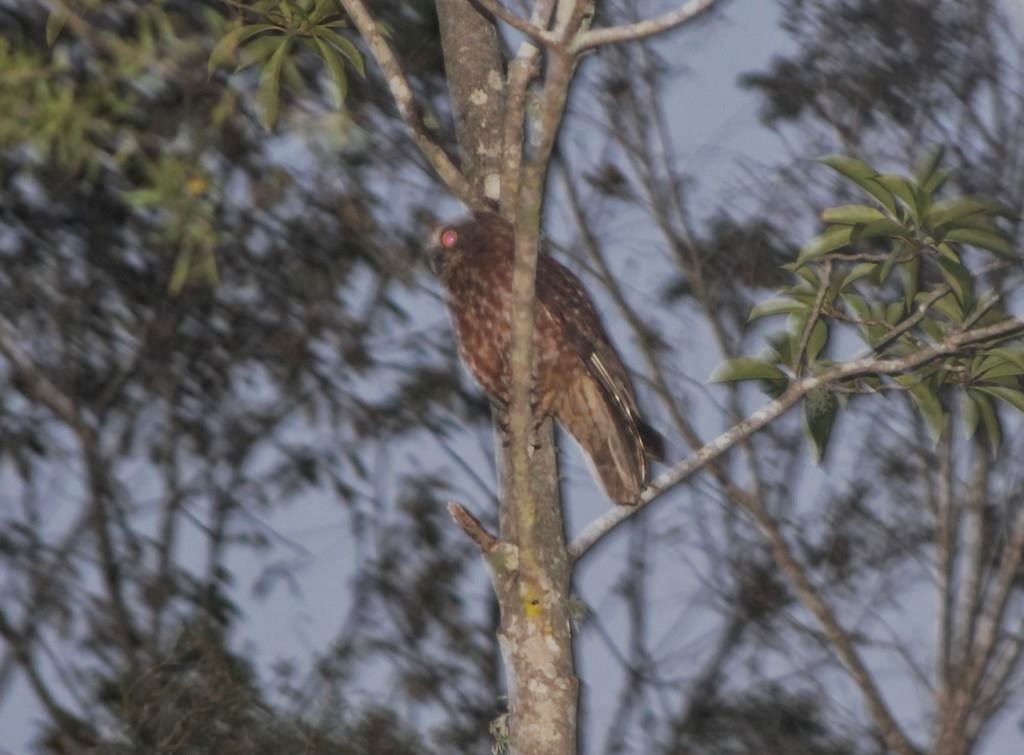 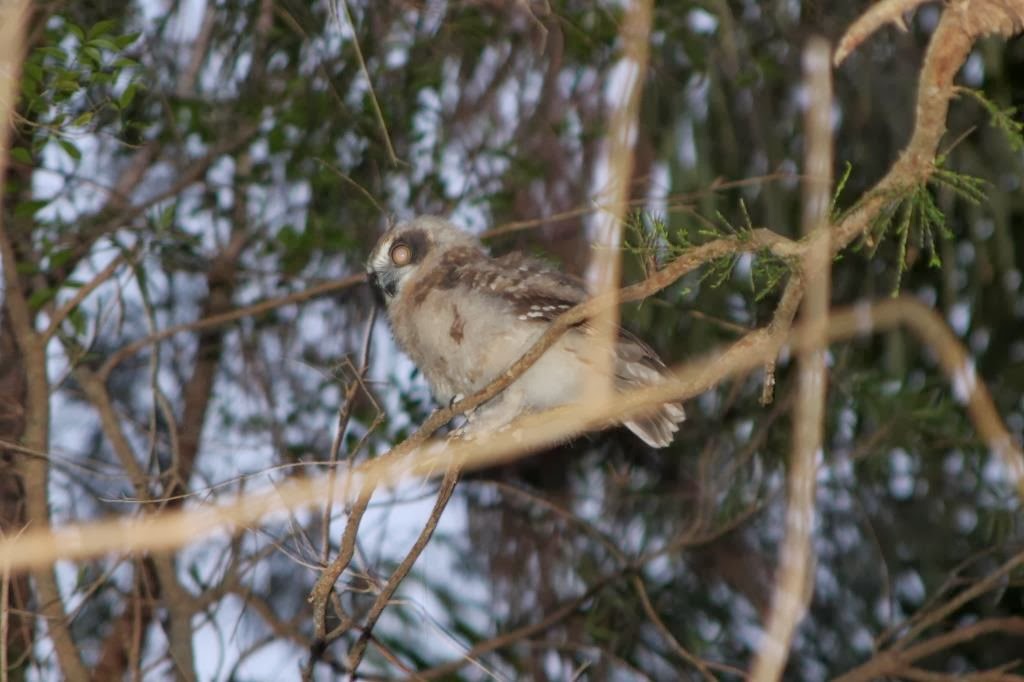 Juvenile on 03.12.13
Four birds, two adults and two juveniles, were in the yard for the whole of the next two days being occasionally harassed by the very vocal honeyeaters and other birds.  I was able to get some better photographs. 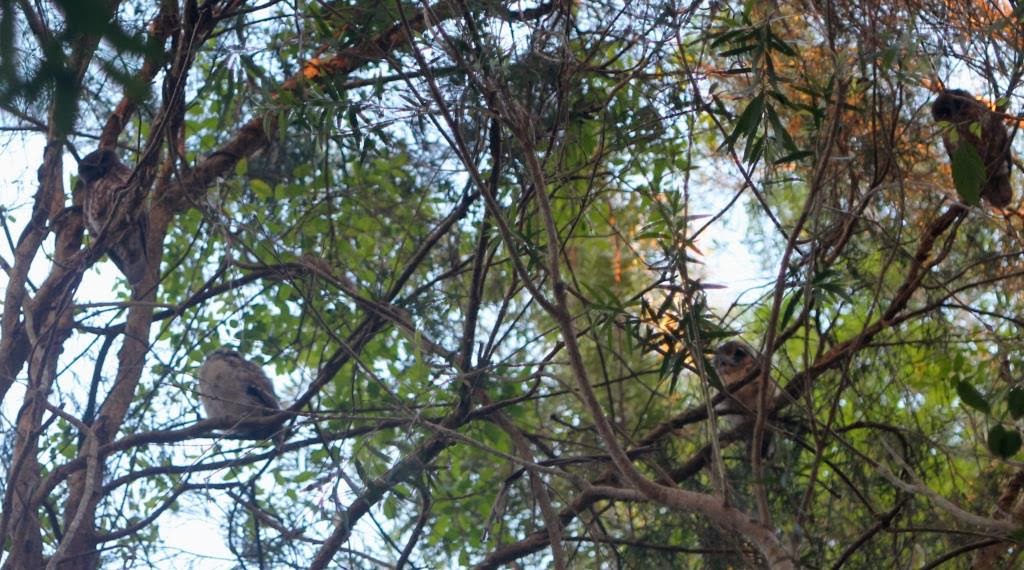 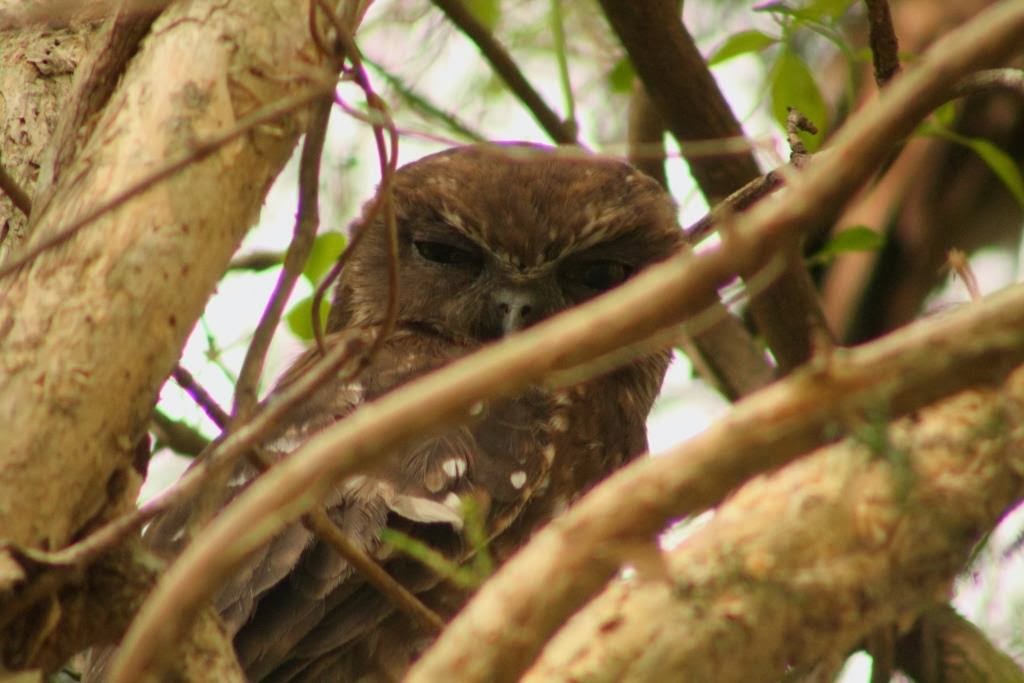 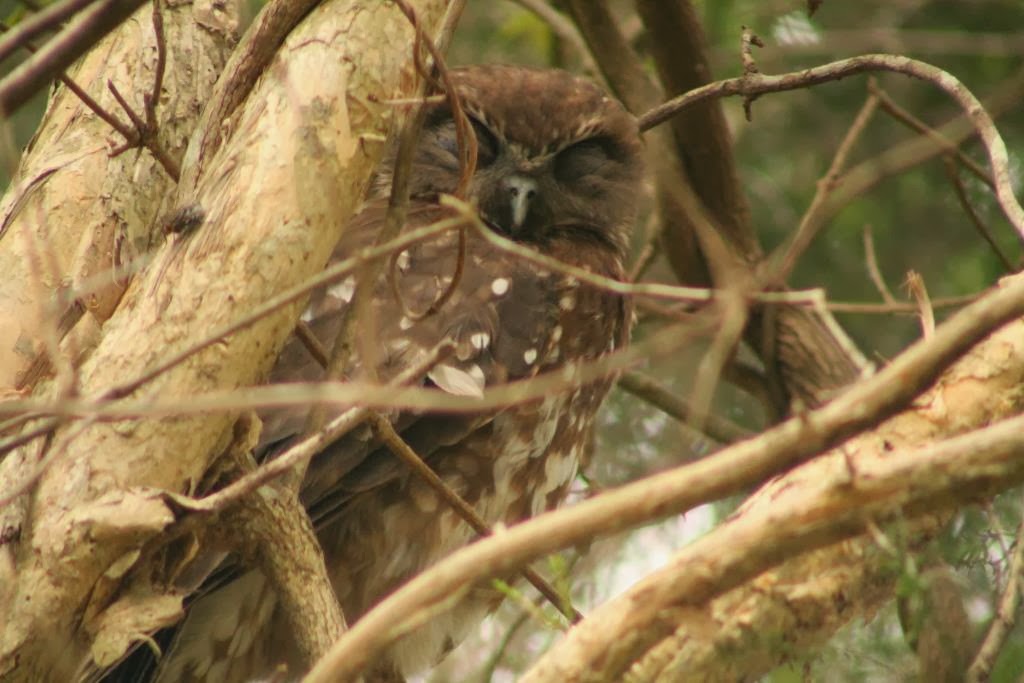 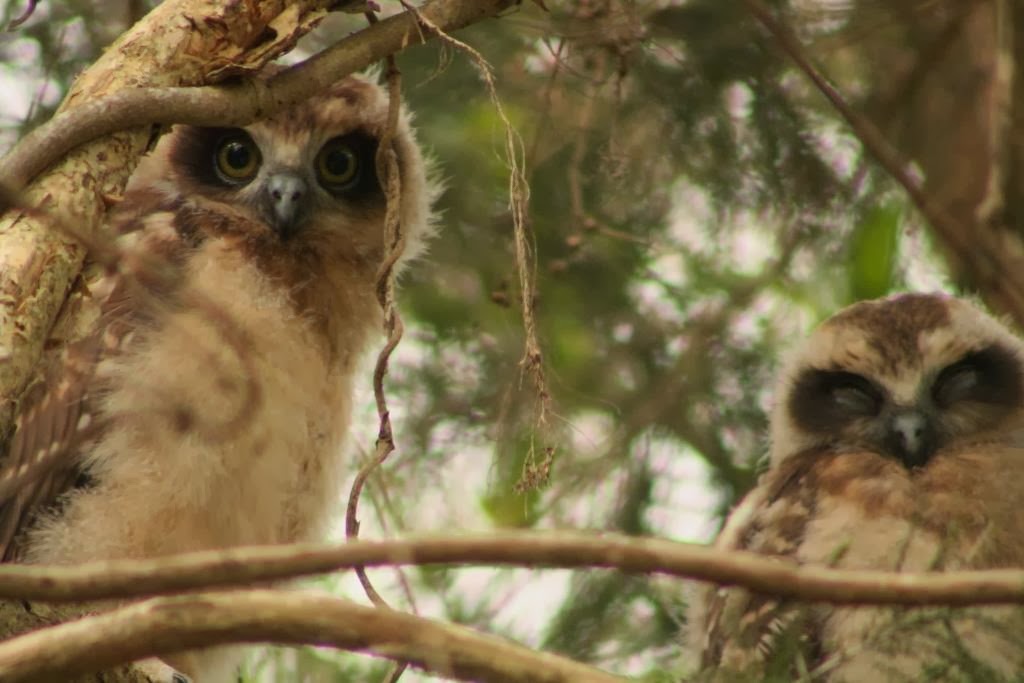 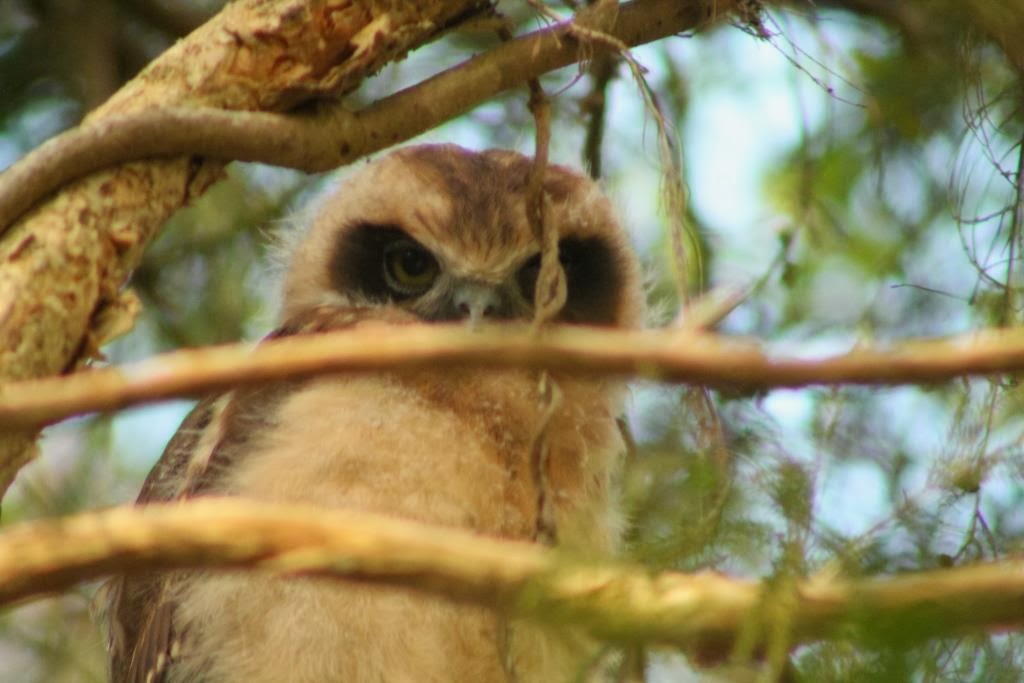 
They didn’t return to the yard after that but a juvenile was found alone in a park near our place
a couple of days later.  It flew to the ground when approached so was taken into care
for  its own protection.  A search for the adults proved futile.  If the adults had been found
the youngster would have been released with them.  The juvenile was placed in a carer’s aviary        with two other Boobooks of similar age.   I placed a numbered stainless steel band on the leg          of each of these birds on January 9 and released the Coutts Crossing bird that evening.                    It flew off strongly and swiftly and disappeared into the darkness.  The other birds were from         Waterview Heights and South Grafton and will be released close to where they were found. 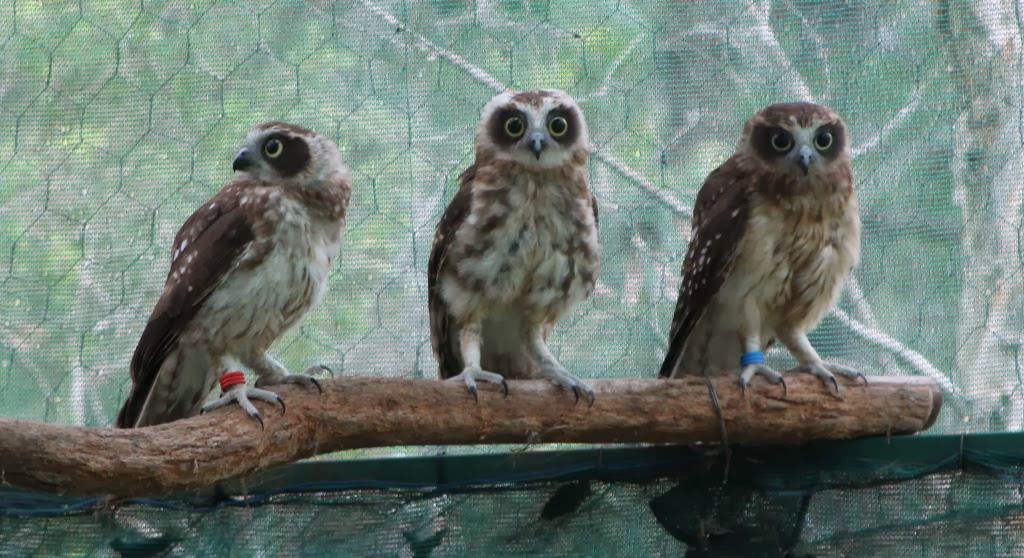 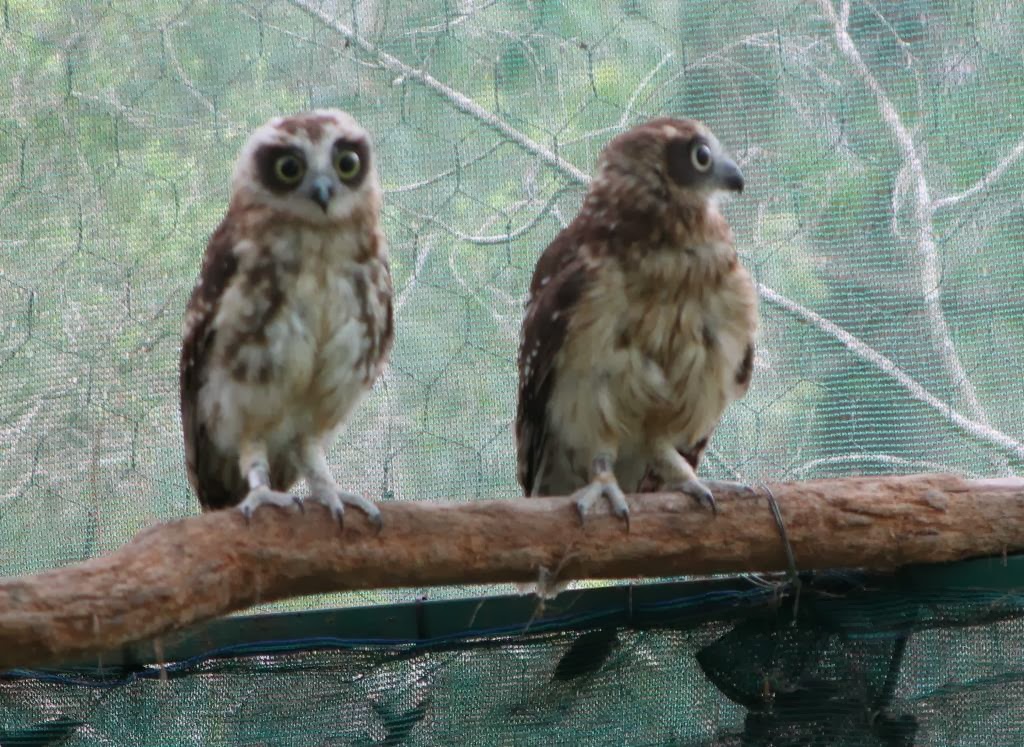 I could hear an adult Southern Boobook calling close to home two nights later so hopefully the young bird will reconnect with its parents or be able to fend successfully for itself.  It was feeding itself well in captivity.


I look forward to the December 2014 visit of our Southern Boobook family.

Posted by Greg Clancy Ecologist and birding guide at 17:20 No comments: