The Black-necked Stalkers Twitchathon team of Gary Eggins, Russell Jago and me (Head Stalker) decided to vary our route this year to take in some of the western birds that don’t usually occur in the Clarence Valley.  I had carried out some tours for the inaugural Gwydir Bush and Bird Fair at Warialda and became acquainted with some local birds that do not occur on the coast.  It seemed like a good place to start our twitch.  It isn’t as far west as some other teams start but it would, hopefully, give us an advantage that we wouldn’t have if we stayed on the coast.  We were keen to better our 2012 tally of 209 species, our best to date.


We decided that as we were only going to get three hours sleep on Saturday night a sleep in on Saturday morning was the go.  However we didn’t realise until just before the big day that the Grafton to Inverell cycle classic was being run on the same day and the last thing we needed was to be caught up behind hundreds of cyclists and their support vehicles.  So much for the sleep in.  Instead of a leisurely 9 AM start we had to be away from Gary’s at Waterview Heights no later than 7.30 AM.  We did manage to do it and just beat the road closed signs which were being erected as we drove past.  Up the Gibraltar Range towards Glen Innes and a circling raptor drew our attention.  By the time we stopped the vehicle it had gone but we did see three Brown Falcons hunting over a recently logged pine forest.  The other raptor was almost certainly a Little Eagle but its identity couldn’t be confirmed.  The stop was fortuitous as we noticed a very squashed roadkill nearby.   It was a Long-nosed Potoroo, a species not seen too often, but known to occur on the Gibraltar Range.  We didn’t linger as we had visions of hundreds of sweaty cyclists boring down on us.  In reality they would have been a couple of hours behind us but we weren’t taking any chances.
We passed through Glen Innes then checked out Lake Inverell for rarities.  A Hoary-headed Grebe was the most interesting species observed.  Then on to Warialda where we had lunch.  Gary and I wandered over to the showground to do a reconnaissance but Russell was missing his sleep in so stayed stretched out on the picnic bench.   We found a Pale-headed Rosella and a hybrid that had more Eastern Rosella colours inspecting nest hollows in a large eucalypt.  I saw a raptor and it turned out to be a Black Kite.  Then there was another and another until twelve of these raptors circled over our heads and disappeared into thin air.  We had a couple of hours until the official start time of 4 PM (16:00 hrs).  Would they return in time?  Would we get them somewhere else?  It was, after all a Twitch, and normal conditions don’t exist for 24 hours.  I located the Plum-headed Finches, one of the targets at this site so was feeling quite confident.   Russell had stirred and joined us along the creek as we checked off other birds that we would need after 4 PM.  It was looking good but we still had an hour and a half until twitch time.  I located a Black-fronted Dotterel and we had Pale-headed Rosella , Fairy Martin, Double-barred Finch and Red-browed Finch all in view as we waited.    Just minutes before the start time the Dotterel vanished but reappeared just as the clock struck 4.  It was our first species for the year.   We added a number of common species and by the time we reached the Plum-headed Finch site we had 35 species including Red-winged Parrot, Pale-headed Rosella, Common Blackbird, Spiny-cheeked Honeyeater and Red-rumped Parrot, all species not occurring on the north coast.  But where were the Plum Heads?  Time was flying but then I spotted one on a fence wire.  It was checked by Gary and Russell and we were off to Cranky Rock.  The Black Kites were nowhere to be found!! 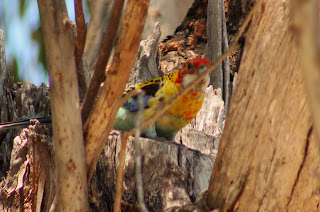 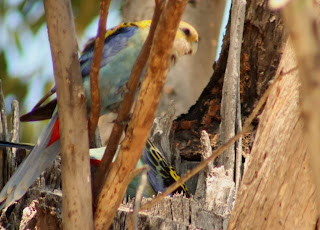 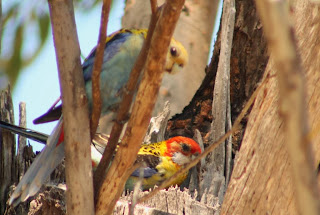 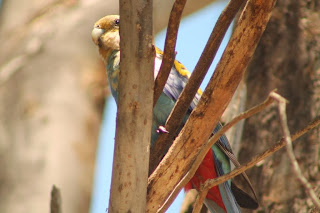 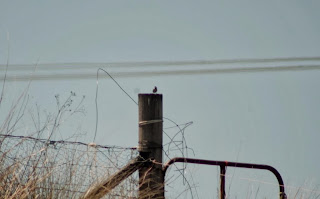 The ‘goodies’ usually found at the Rock were nowhere to be found but we did get thirteen species including Cicadabird, Grey-crowned Babbler and White-eared Honeyeater.  Then down the Highway to Delungra picking up Common Bronzewing on the way.  Remembering that Inverell was likely to be awash with cyclists and their entourages we decided to head to Severn River Nature Reserve from Delungra via Ashford.  This proved a worthwhile route except that every macropod in Australia was lined up along the road.  Most behaved well but one small Swamp Wallaby was as determined to get squashed by our tyres as I was not to squash him.  The result was a very close shave and some uncharacteristic driving by me as I did donuts to avoid him.  My son and son-in-law would have been proud of me!!  We did get Turquoise Parrot, Masked and White-browed Woodswallows and Rufous Songlark and others along that stretch but arrived at Severn River Nature Reserve after dark.  This was a bit disappointing as we had a few diurnal species that we were after at this location.  We had to be content with Tawny Frogmouth and Southern Boobook.  The neighbour’s barking dog almost went down as a Barking Owl but our quality control officer ensured that it didn’t.


After eating dinner and having a quick cuppa at the gate to the Reserve we headed off with high hopes of adding more nocturnal birds to our list.  We weren’t disappointed for as we approached Glen Innes an Eastern Barn Owl dropped swiftly from a roadside tree and glided across the front of the windscreen and pounced on an unsuspecting animal on the roadside.  We were lucky not to hit the bird that came out of left field.  Our hopes began to fade a little though when we could only add Black Swan, Australian Owlet-nightjar and Masked Lapwing to the list before our 3 hour break at Washpool National Park.  An Eastern Koel and a Noisy Pitta serenaded us as we tried to get a couple of hours of shut-eye, making 95 species, but the Sooty Owl was conspicuous by its absence.  The Pitta seemed to call all night and was still going strong during the dawn chorus the next morning.  A Pale-yellow Robin was contributing to the dawn chorus and had us stumped at first.  We don’t hear them all that often.  We ticked off the usual rainforest species such as Yellow-throated and Large-billed Scrubwrens, Black-faced Monarch, Logrunner, Brown Cuckoo-Dove, Superb Lyrebird and Bassian Thrush.   The Rufous Scrub-bird didn’t disappoint calling loudly from its rainforest gully in the granite but our usual Twitch individual wouldn’t talk to us.  This is when it pays to have more than one bird lined up.  Southern Emu-wren and Scarlet Robin appeared in the hanging swamp area along Mulligan Drive making 120 species by 6.30 AM.   The drive down the Range was productive and we picked up Wompoo Fruit-Dove, Red-browed Treecreeper, Bell Miner and Crested Shrike-tit.  At our regular stop near Cangai we heard our expected Little Bronze-Cuckoo and had a bonus in the form of an adult male White-winged Triller.  The next stop near a farm dam produced nine species including Brush Cuckoo, Tawny Grassbird and Restless flycatcher.  A Cicadabird was calling vociferously but it was wasted on us as we had ticked it off the day before at Cranky Rock, as was the Tawny Frogmouth on the nest near Mulligan’s Bluff.


We finally arrived at South Grafton and were met by a small flock of Yellow-tailed Black-Cockatoos, a species that can be very hard to find on Twitch weekend.   We then drove out to Coutts Crossing to get the Brown Falcon and Latham’s Snipe that were there a couple of days before, picking up Black Kite at the waste depot on the way.  The Falcon was nowhere to be found but the Snipe cooperated and we also ticked off Black-necked Stork, Comb-crested Jacana, Wedge-tailed Eagle and a very unexpected, solitary, Topknot Pigeon flying swiftly northwards.  Next we were off to Lawrence, getting Eastern Osprey and Brolga south of the village.  A small deviation resulted in Buff-banded Rail, Nankeen Night-Heron, Brahminy Kite and Chestnut-breasted Mannikin, the last being missed at Warialda.  The expected Pink-eared and Freckled Ducks were still at the egret colony swamp as were a few Whiskered Terns, including a bird in non-breeding plumage which warranted a closer examination.  We tried, unsuccessfully to make it into a rare species but had to give that idea up when we realised it was just a non-breeding Whiskered.


The Brooms Head-Sandon area was visited next and despite it usually being a reliable area for the endangered population of the Coastal Emu none were recorded.  We ticked off a number of shorebirds, getting virtually all the species that we had hoped for.  The Varied Triller was silent though.  Then off to Iluka, picking up Forest Kingfisher on the way.  The Iluka Nature Reserve produced every species anticipated except, again, the Varied Triller.  The first bird recorded there was the White-eared Monarch.  The Woody Head area was reached at 3.15 pm so we had to make the most of the last 45 minutes of the Twitch.  We did get Australian Brush-turkey, Australian Pied Oystercatcher, Gull-billed Tern and Lesser Sand Plover but the Greater Sand Plovers were not there.  The Lesser Sand Plover made bird number 221, our best tally ever. 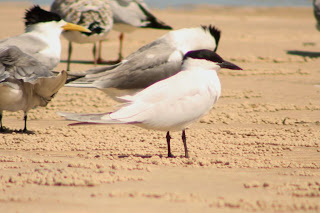 
Once the results were tallied we found out that we had come third in the main race, again a first for the Stalkers.  We were only three species behind the Menacing Monarchs who had been the winners in the past two Twitchathons.  The Hunter Home Brewers had won with a staggering 252.  Starting way out west in the Mallee certainly gave them the edge.   We recorded 19 threatened species of birds and two mammals (Long-nosed Potoroo and Humpback Whale).


Before the dust had settled our brains were ticking and we were planning how we could do better next year.  It will be a challenge as we had a dream run this year with no flat tyres, leaking gas bottles or other disruptions that can occur.  The weather was also perfect.  So on with the 2014 Twitchathon planning.


Posted by Greg Clancy Ecologist and birding guide at 14:06 No comments: