Birds coping with the heat wave

The past weekend in the Clarence Valley, as in many other parts of Eastern Australia, has seen the temperature rise to the low forties.  This has put a strain on the electricity supply with everyone running their air conditioners and fans at full power.  There was a blackout last night, presumably due to the excessive demand.

Birds don't have the luxury of air conditioners but their feathers are good thermal regulators and they adopt behaviours to reduce heat stress.  One behaviour is to sit on a perch with wings drooped and spread and with the bill open and the bird panting.  Yesterday our bird bath was the centre of attention with an immature male and and adult female Australian King-Parrot spending many hours perched on its rim.  They weren't seen to drink or bath but just sat there above the cool water.  I suspect that they did drink when I wasn't watching.  A whole line-up of other birds came and went as they sat there, not moving.  A Noisy Friarbird took charge and chased off two Lewin's Honeyeaters but they quietly returned when the aggressive Friarbird had moved on.  The Little Wattlebirds, that usually own the bird bath, were in and out as the larger parrots and pugnacious Friarbird seemed to make them a bit shy for once.  A Willie Wagtail popped in for a drink. 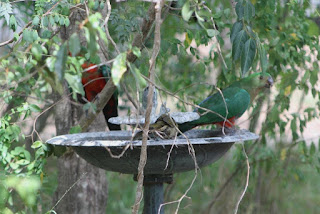 An Olive-backed Oriole drank at a water dish nearby and two or three Grey-crowned Babblers came in to the bird bath for a drink.  They don't usually visit the bird bath so the extreme heat must have influenced this behaviour.  A Little Friarbird also tried its luck against its larger relative and successfully managed a short drink. 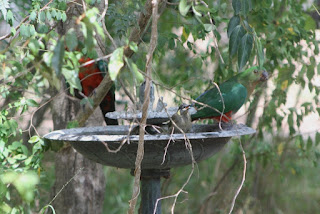 This morning three Bar-shouldered Doves walked in to the water dish and drank.

Hopefully these heat wave conditions will subside soon but with the predictions about the effects of climate change we are likely to be in for some regular bouts of extreme weather on a regular basis.
Posted by Greg Clancy Ecologist and birding guide at 08:29 No comments: