Banding was carried out at the northern end of the Nature Reserve, off the Iluka Bluff Road, on 12 & 13 October and at the southern end, off Long Street, on October 14.


Fifty-six birds were mist netted over the three day survey.  Three were retraps, having been banded previously, and fifty-three were banded as first time captures. 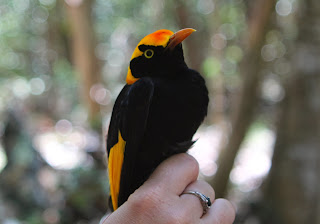 Adult male Regent Bowerbird
The results are shown in the table below.

All species trapped were ones that are regularly banded at the site, including some very colourful species such as the Rufous Fantail, Spectacled Monarch and Regent Bowerbird.  The site is an important one for the uncommon Bowerbird and the eight Bowerbirds banded during the survey constituted the largest number of the species caught at the site for some years. 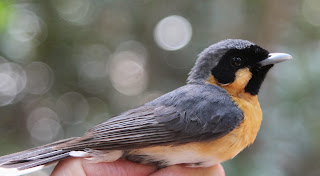 The three retraps comprised one Golden Whistler banded on October 12 and retrapped on October 13, one Large-billed Scrubwren and one Lewin’s Honeyeater.  Their banding and retrap details are as follows:


Interesting observations were of at least two White-eared Monarchs on all days.  Rose-crowned Fruit-Doves were heard each day. 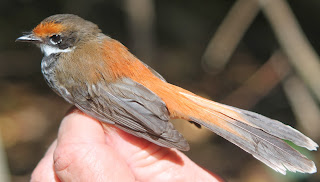 Posted by Greg Clancy Ecologist and birding guide at 18:04