On November 14 and again on November 21 Warren Thompson and I travelled ‘down river’ to check out the local wetlands and bushland and to catch up with any Black-necked Storks that were around.  We recorded 119 bird species on the first trip and 121 on the second trip making a combined total of 139 species for the two days.  Highlights on the first trip were the number of White-winged Trillers with 8+ seen or heard at six locations and a Rufous Songlark at Southgate Creek.  Interestingly neither species was recorded on the second trip.  Also on the first trip I saw an Australian Shelduck.  This species is only seen occasionally on the NSW North Coast and mostly single birds are seen.  I had only a distant view in rainy weather but the large size, extensive white in the wings and slow heavy wingbeats identified it as a Shelduck.  Freckled Ducks and Pink-eared Ducks were seen on both trips with 22+ and 26 of the former and 500+ and 700+ of the latter respectively at Lawrence.  Magpie Geese were at the dam north of Coutts Crossing with 10+ on the 14th and 24 on the 21st.  An immature Spotted Harrier was seen on both trips with the one on the 21st floating low over the road and landing in a riverside bush, allowing us to take some good photos.

A very dark brown coloured falcon on the same day had me getting excited about the prospect that it may have been a Black Falcon.  That species is very rare locally.  After taking many photos the bird took off and flew some distance before attacking an adult female Brown Goshawk.  As it flew I could see that it was, in fact, a very dark Brown Falcon.  It was a little disappointing but still a beautiful bird.  A total of 13 bird species listed as threatened in NSW were recorded with one threatened mammal species, the Rufous Bettong also noted.  Unfortunately it was a roadkill.  Our main target species, the Black-necked Stork, was scarce with a number of nests being temporarily abandoned and a couple falling from the nest trees.  The extremely dry weather in recent months, which has now turned into regular afternoon storms with large deluges, may have signalled to the storks that it wasn’t a good time to breed.  An adult pair was seen, on Woodford Island, on November 14 and six were seen on November 21.  Three immature birds were ascending on a thermal, with two Australian Pelicans, over Crowsnest Swamp near Glenugie.  Later in the day an adult female with her two juvenile offspring we at a wetland close to their nest at Gilletts Ridge, near Ulmarra.  I had hoped to colour band these youngsters but the cherry picker broke down and by the time it was repaired they had fledged. 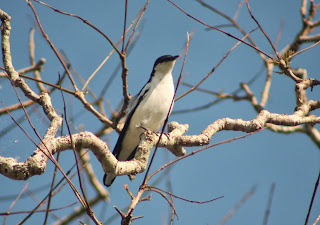 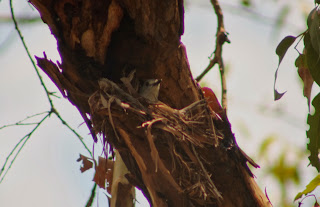 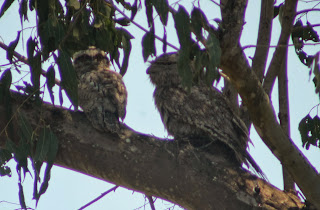 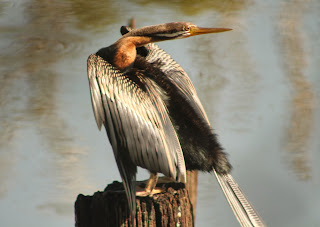 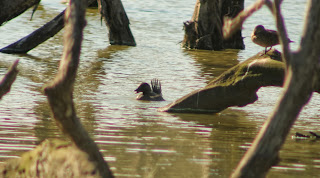 
Posted by Greg Clancy Ecologist and birding guide at 22:42