Migrants on the move

As summer disappears and autumn is upon us it is time for migratory birds to be on the move.  During February and March our yard, and the surrounding area, has been visited by a variety of migrant species.  In my last post I discussed the Spangled Drongo, with some individuals travelling north and others going south for the winter.  The late summer-autumn movement of birds in northern New South Wales involves two groups.  The first is comprised of those that breed in the southern states and travel to northern Australia or cross Torres Strait to New Guinea and other Pacific Islands.  The second are those that travel from Tasmania, Victoria and southern New South Wales to winter in areas of northern New South Wales and southern Queensland.  The first group has been recognised as migrants for many decades and includes the well known migrants such as the Dollarbird, Sacred Kingfisher, Rainbow Bee-eater, Cicadabird, Leaden Flycatcher, Satin Flycatcher, Black-faced Monarch, Spectacled Monarch, Rufous Fantail, White-breasted Woodswallow, White-throated Gerygone and most of the cuckoos.  The second group has only been recognised as migrating northwards in recent decades, particularly since bird banding has been carried out.   The first of these southerners to be found in northern NSW and southern Queensland was the Silvereye.  Prior to banding it was thought that there were two species of Silvereye in New South Wales, the Grey-backed and the Grey-breasted and at another time it was thought that rather than there being two species local Silvereyes changed their colours during the winter.  Once birds banded in northern NSW and southern Queensland were retrapped in Tasmania it was realised that there was only one species involved but it comprised different races or colour varieties.  A number of banders contributed to this work but S.G. (Bill) Lane, John Liddy and D. M. Walker were involved significantly in working out the plumage differences of the different races/populations.  Tasmanian Silvereyes have bright chestnut flanks and white throats, Victorian birds have bright chestnut flanks and yellow throats and birds from Sydney north tend to have pale buff to grey flanks and yellow throats.  It is a little more complicated than this and birds from the Canberra area can also be distinguished.  So from the 1960s it was known that some Tasmanian and Victorian Silvereyes migrated north during the winter but it has only been in recent decades that we now have evidence to prove, or to strongly suggest, that Grey Fantails, Golden Whistlers and Striated Pardalotes migrate from Tasmania.  We know that the Tasmanian race of the Striated Pardalote does, as it is the only race with a yellow spot on the wing.  All of the other races have a red spot.  I have observed these 'Yellow-spotted Pardalotes' in my backyard in Coutts Crossing.  Almost 100% of Grey Fantails that I band in the Clarence Valley during the autumn-winter are Tasmanian birds as are a high proportion of the Golden Whistlers.  This is determined by the tail-wing ratios of these birds.  Schodde and Mason in the Directory of Australian Birds provide measurements of the different races (taxa) allowing them to be identified to race by measurement.   Large numbers of Yellow-faced Honeyeaters and White-naped Honeyeaters also migrate to the NSW north coast and Southern Queensland during the autumn-winter months and flock to the coastal heaths seeking nectar, along with large flocks of Silvereyes.  Other birds, such as the Pacific Baza,  also appear to be on the move but how migratory this species is is still being debated.  It appears near our home during late summer to autumn, usually comprising flocks of adults with dependent young.  They stay for a few days and then they are gone, apparently migrating.

On February 2 2014 I observed three juvenile Pacific Bazas hunting in eucalypts in a park at Coutts Crossing.  On February 4 I banded a juvenile that was in care and on February 8 an adult bird with three dependent young landed in the trees in our backyard and spent a couple of hours foraging in our local area. 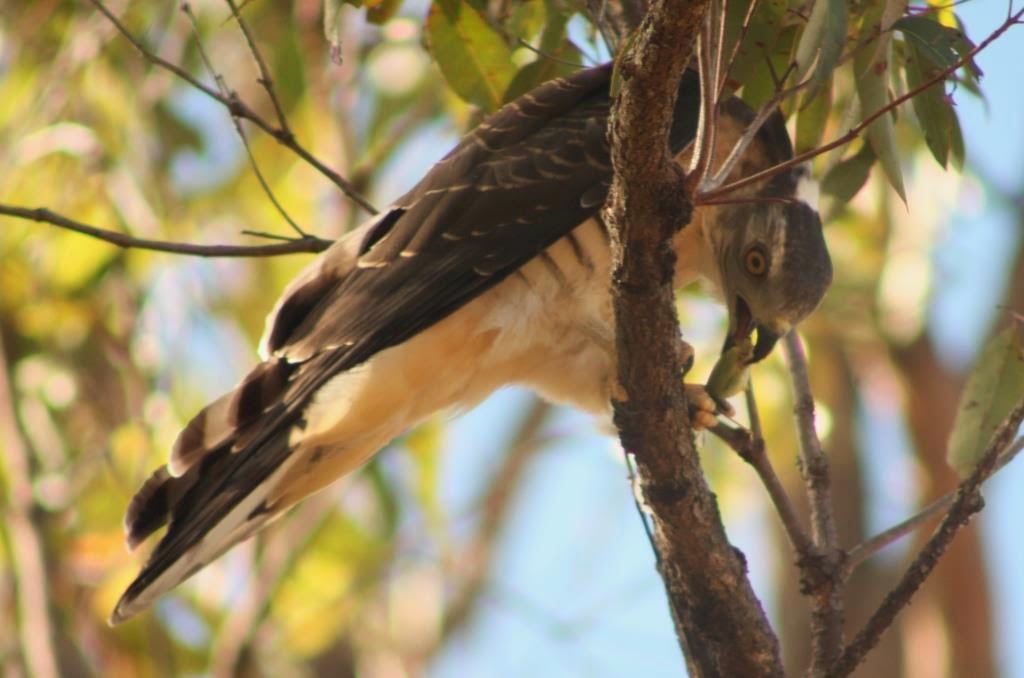 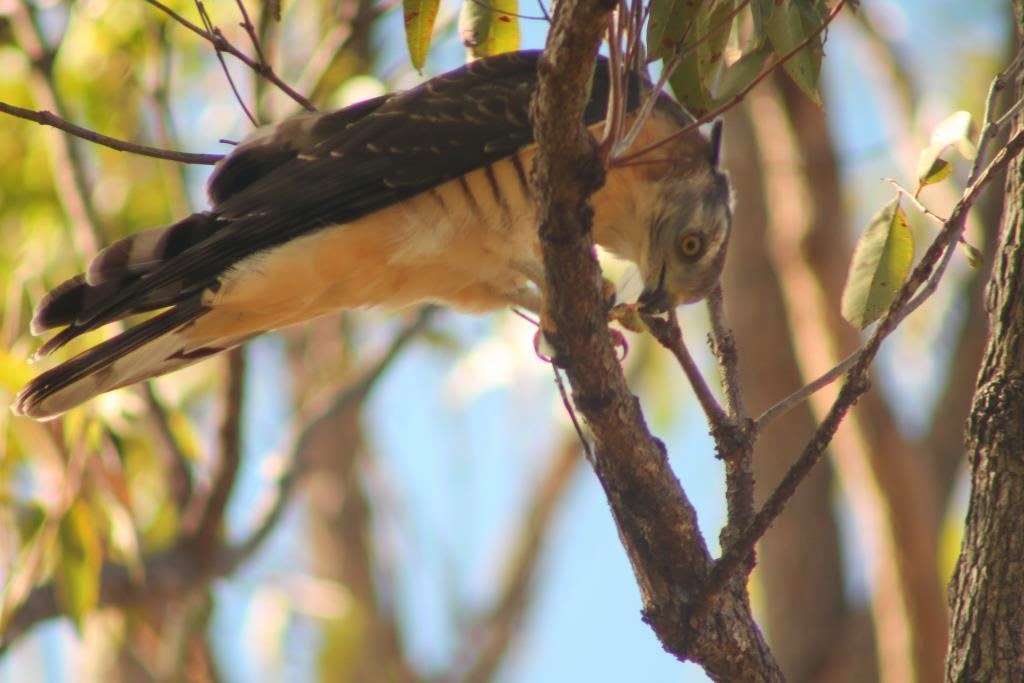 The details of migrating birds at Coutts Crossing are as follows:


Satin Flycatcher:  An adult female of this species was first observed and photographed, in our backyard on 17/03/14.  It stayed for 5 days.  This is a very remarkable record as Satin Flycatchers are usually absent from the lowlands of the New South Wales (NSW) north coast.  They breed at high altitudes at places such as Ebor and Wollomombi.  A couple of reports some years' back on the Clarence lowlands were not supported with photos or detailed descriptions.  Confusion often arises between this and the very similar Leaden Flycatcher.  My bird was identified as a Satin Flycatcher by Jeff Davies, who has had plenty of experience with the species.  I originally identified it as a female Leaden Flycatcher but when I examined my photos I could see that it had some characteristics that Jeff had used to identify a Satin Flycatcher from Sydney.  These characters were the brown, not grey, flight feathers and white edging to the wing coverts.

Rufous Fantail: One Fantail was observed in local bushland on 15/02/14 and an adult turned up in our back yard on the same day as the Satin Flycatcher (17/03/14).  They are, indeed, a beautiful little gem of a bird.  A juvenile was present in nearby bushland on 29/03/14.


﻿
﻿﻿﻿﻿﻿﻿﻿﻿﻿﻿﻿﻿﻿﻿﻿﻿﻿﻿﻿﻿﻿﻿﻿﻿﻿﻿﻿﻿﻿﻿﻿﻿So we say goodbye for a few months to the noisy Channel-billed Cuckoos and Eastern (Australian) Koels and the beautiful Rufous Fantails and Rainbow Bee-eaters and the other migrants.  But the good news is that come spring they will all be back to brighten up our local landscape and lives.﻿﻿

Posted by Greg Clancy Ecologist and birding guide at 20:38