Reconnecting with an old friend - the Cotton Pygmy-goose

A combination of his cabin fever and recent reports on NSW Birdline resulted in Warren Thompson suggesting that we should have a day out to check on the Cotton Pygmy-geese that had been reported at Kyogle.  Rob Elvish had seen 5 geese there on 26 February.  A lone male had been at the site in August 2013.  The species is very rare vagrant in New South Wales with only 5 records up to 1990  when the Handbook of Australian New Zealand and Antarctic Birds (HANZAB) was published.  Rob's recent record was only the sixth since 2006.  One of these six records was a female plumaged bird that I saw at Swan Creek, near Grafton on 22 May 2007, which was first observed there by Maree Davis.   I also saw two female plumaged birds at Lismore Lake on 25 March 2006.

We started our trip at Coutts Crossing and had ticked off Yellow-tailed Black-Cockatoo, Brown Goshawk and Spangled Drongo as well as thirteen other species before we left the village.  A quick check of the nearby Brothersons Swamp added, among others, 4 Yellow-billed Spoonbills and a Glossy Ibis.  The Magpie Geese were still present at the former poultry farm dam NE of Coutts Crossing with 50+ counted.  A well coloured and marked Latham's Snipe was foraging at the edge of a small dam there.


On to Grafton where we checked out the egret colony at the end of the main street.  Nesting was coming to an end with over 500 large nestling Cattle Egrets standing on nests or in the water at the base of the trees.  We then drove along the Summerland Highway to Koolkhan where I spotted a stick nest in the top of a radio tower.  I couldn't see anything on the nest but a dark bird was perched at a platform lower down.  It was an adult Peregrine Falcon.  Peregrine Falcons nest on the large Telstra tower in the centre of Grafton so this tower may also be a Peregrine Falcon nesting location.  I did see an Australian Hobby at this tower a few years back.   A pair of adult Wedge-tailed eagles perched in a large gum tree at Sportsmans Creek didn't wait around to allow us to photograph them.   We pulled into a driveway at Gurranang to check on a bird that I had seen as we drove past.  The bird was a cuckoo-shrike and I thought that it looked like a White-bellied Cuckoo-shrike but we only found Black-faced Cuckoo-shrikes when we stopped.  It was a rich location for birds with a flock of Rainbow Bee-eaters foraging in the air and landing on powerlines and on dead branches of trees.  At least one was a juvenile, lacking the full colour and black throat bar of the adults.  We added Weebill, White-throated Gerygone, Rufous Whistler, Black-chinned Honeyeater, Striated Pardalote and Jacky Winter at this site. 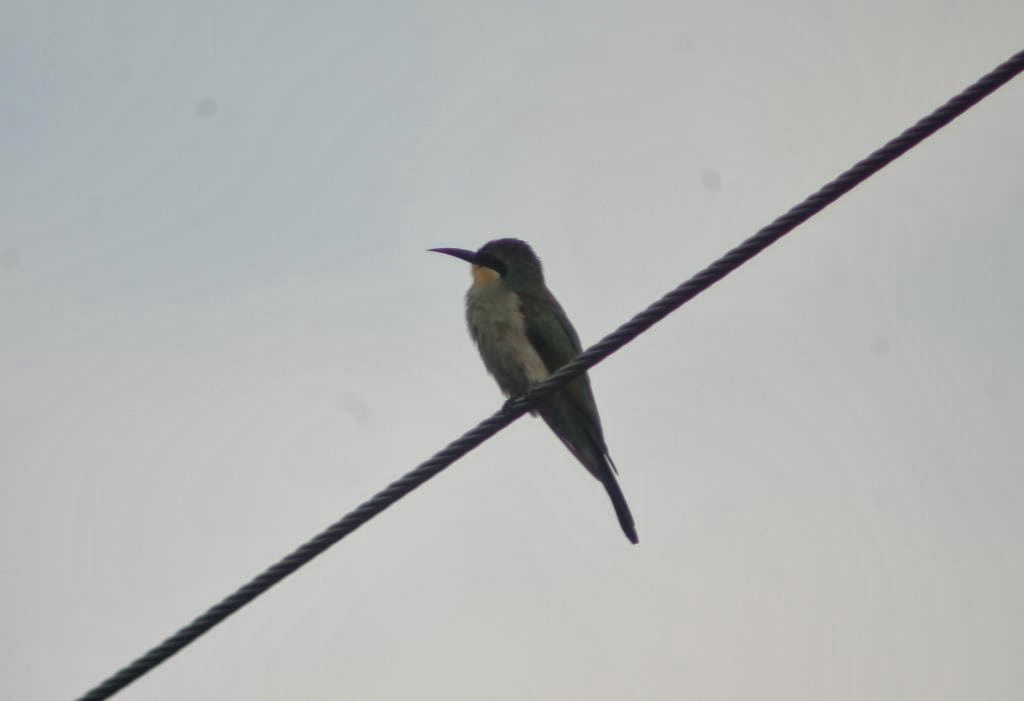 
A cup of tea at Ellangowan Rest Area was refreshing and allowed us to tick off Little Lorikeet.  Other than numerous Fuscous Honeyeaters and a couple of rainbow Bee-eaters, which wad had ticked off earlier, there was nothing else to note.

As we approached Casino I noted a few small bird perched on a powerline.  I thought that they may been finches and Plum-headed Finches would be a good addition to the list.  We did a U-turn and found two adult Chestnut-breasted Mannikins on the powerline.  At Casino we checked out the very dry Geneebeinga Wetlands but found an adult female Black-necked (Satin) Stork, a Black-shouldered Kite, 10 Chestnut-breasted Mannikins and 5 Glossy Ibis and other common species.  The birds were flushed by a low flying Swamp Harrier. 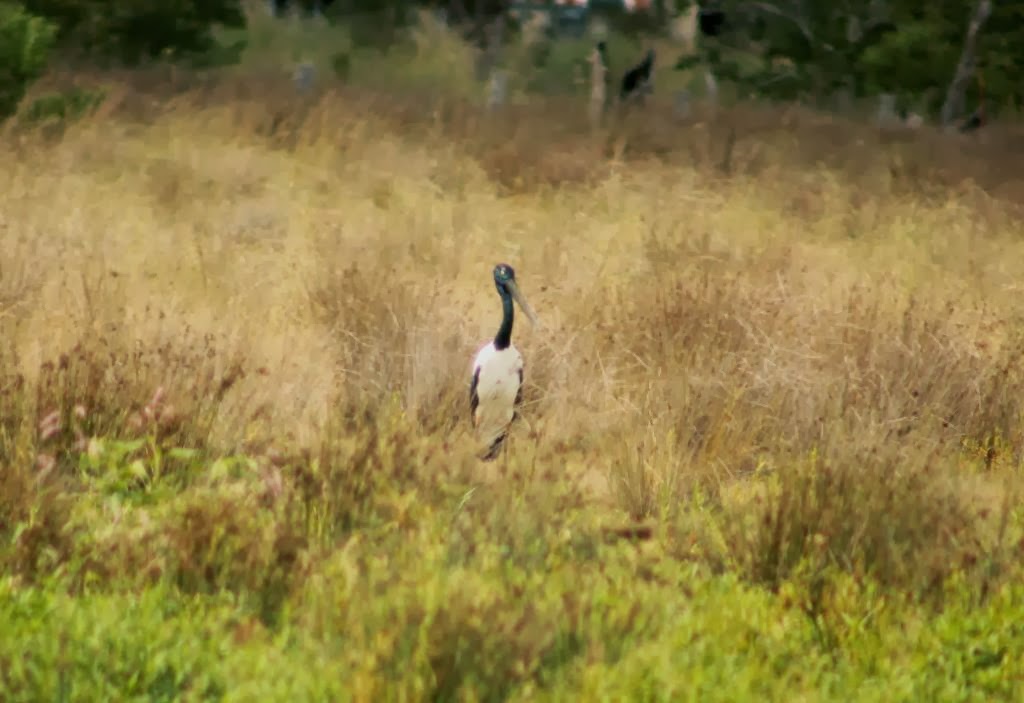 
After checking out the Barling Creek wetland, which was also almost dry, we headed for Kyogle.  We bought pies at the bakery in Kyogle and then put out our chairs at the edge of Lake Harrison waiting for the Pygmy-geese to show.   It didn't take long before I spotted two adult male Cotton Pygmy-geese at the far end of the water body.  They looked good through the spotting scope but photography at that distance was difficult.  I then located two adult females much closer to our position.  They allowed reasonable photos to be taken. 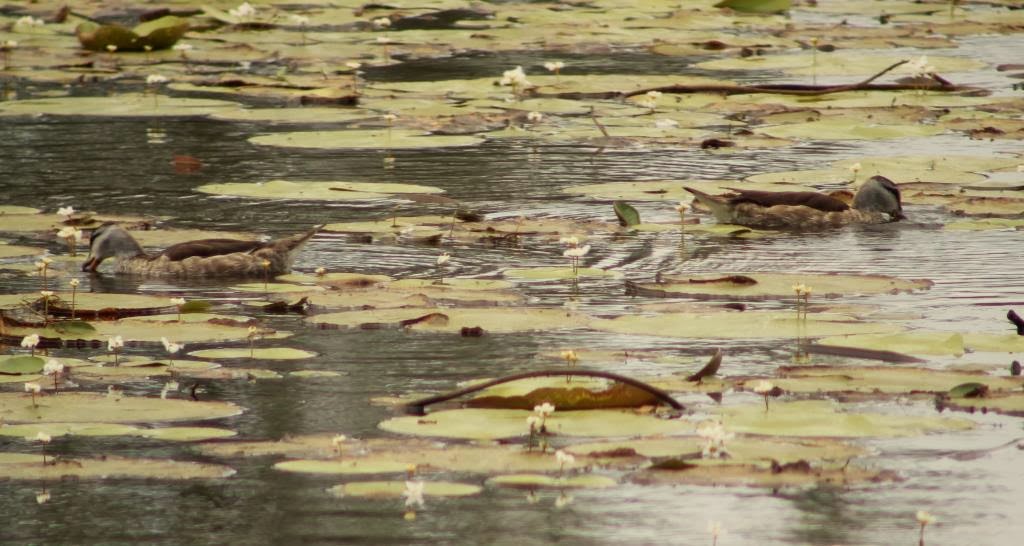 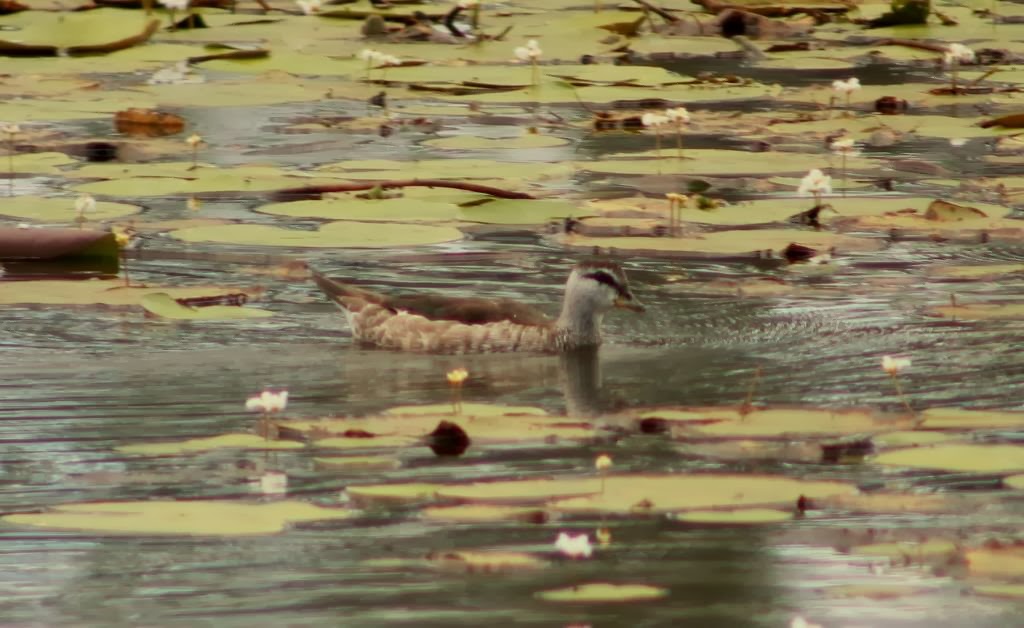 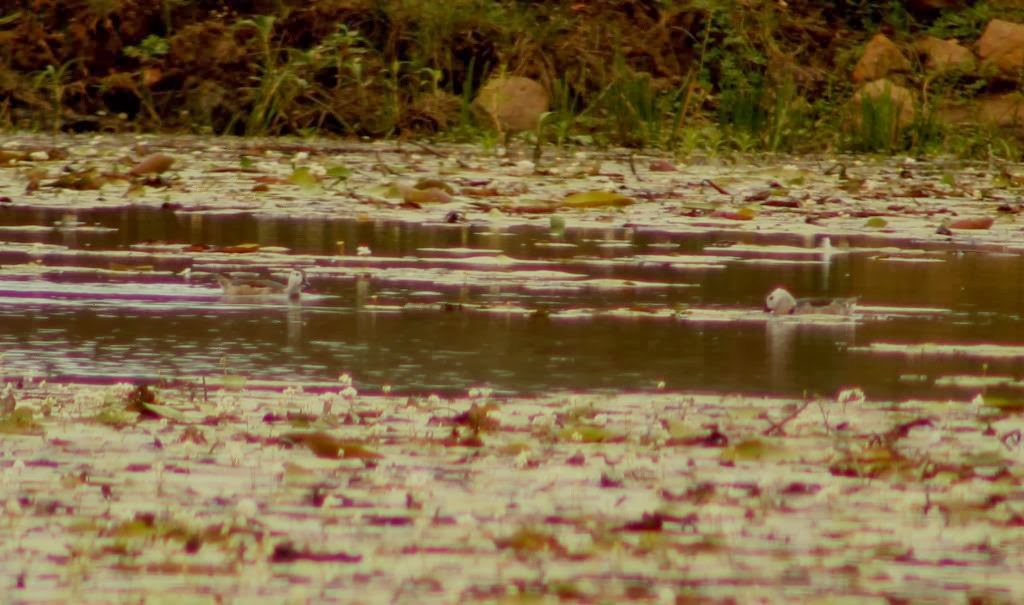 It was interesting that the two males stayed together in one section of the lake while the two females associated in another section.  HANZAB doesn't mention anything about sex-based segregation.

A good variety of other waterbird species was present at Lake Harrison with 11+ Comb-crested Jacanas, 10 Plumed Whistling-Ducks, an adult pair of White-bellied Sea-Eagles, two Black-winged Stilts and many Eurasian Coot. 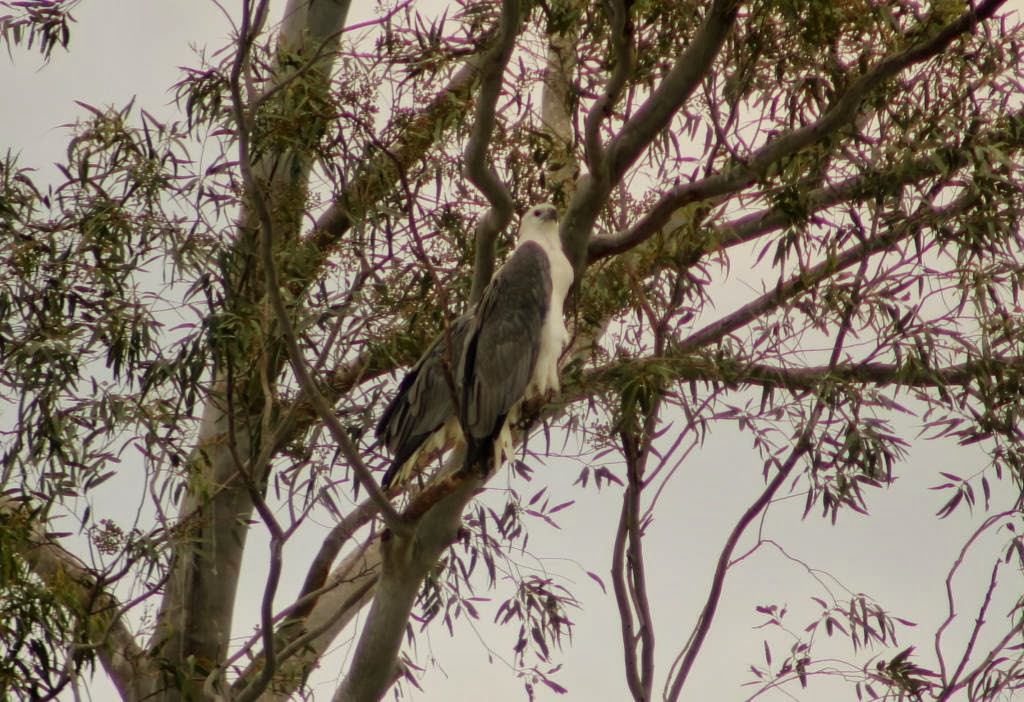 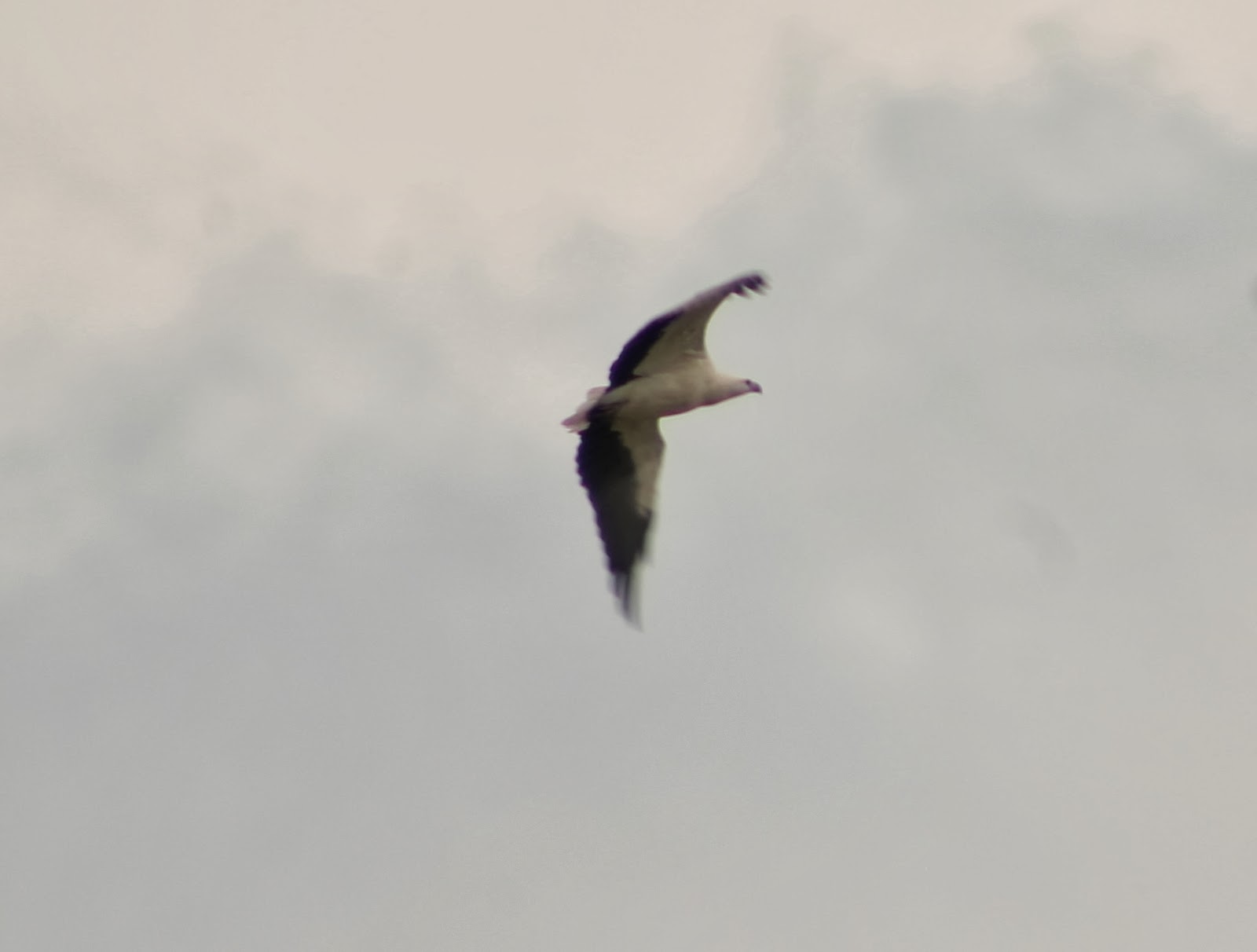 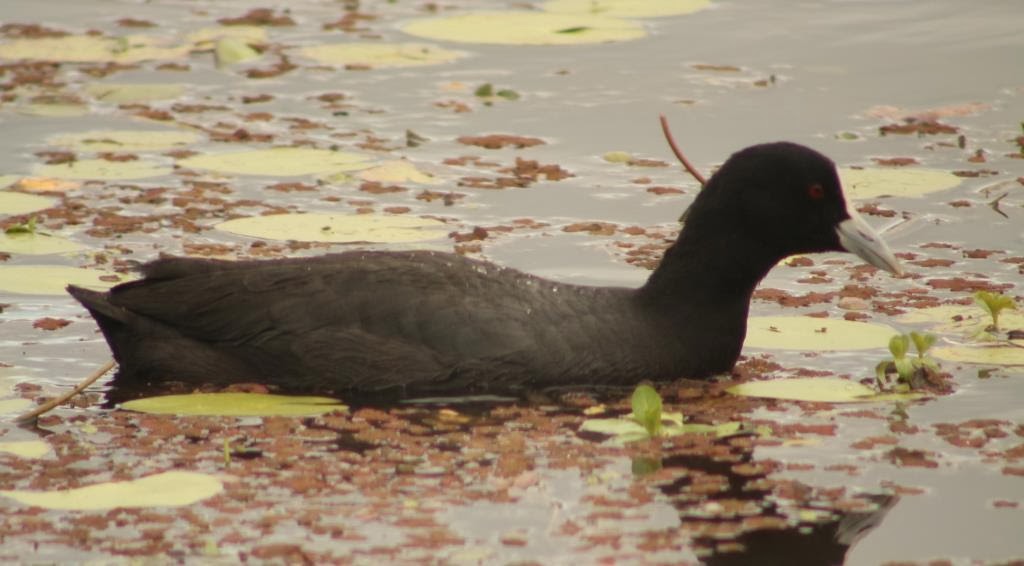 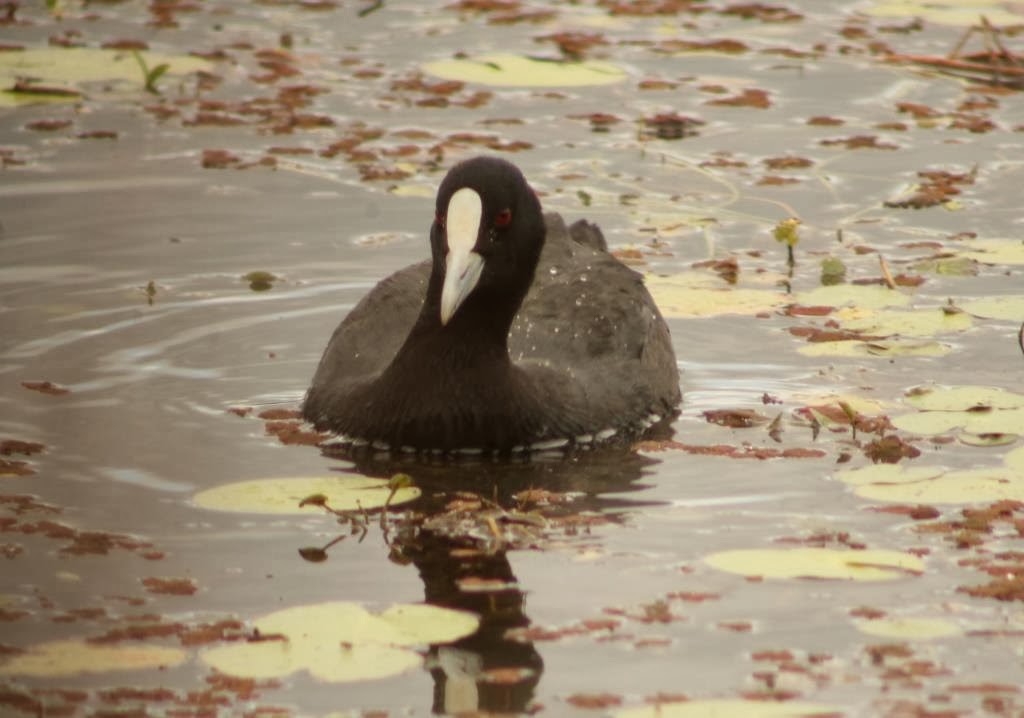 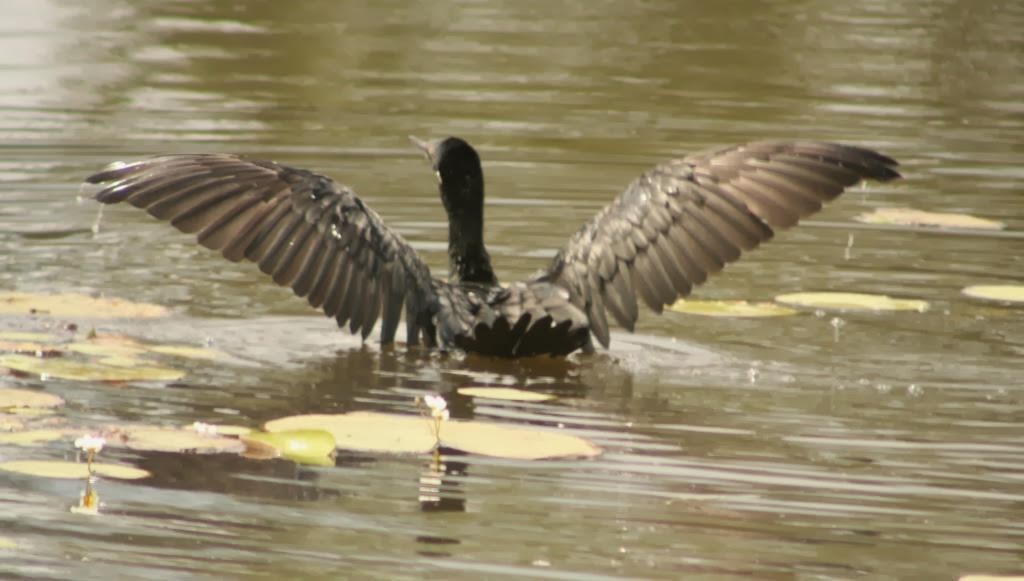 We had visited a wetland at Stratheden in the past and had always seen a great variety of unusual and rare waterbirds there so we headed home in that direction.  There was  pair of adult Black-necked (Satin) Storks on a small wetland at Stratheden.  We missed the turnoff to the main Stratheden Wetland (don't ask!!) and ended up visiting Doubtful Creek and Dyraaba.  It was a great mistake as we found a wetland alongside the road where we ticked off  6 Wandering Whistling-Ducks, 27 Plumed Whistling-Ducks, a Latham's Snipe, two Glossy Ibis and 5+ Comb-crested Jacanas.  Four more Glossy Ibis were foraging in a dry paddock nearby, an unusual habitat.  At Dyraaba we found a Greyhound kennel where 12+ Black Kites, 4 Whistling Kites and 2+ Wedge-tailed Eagles were scavenging.  One Wedge-tailed Eagle was a juvenile (see photo).  A little further along the road we saw an adult Pacific Baza fly into a eucalypt. 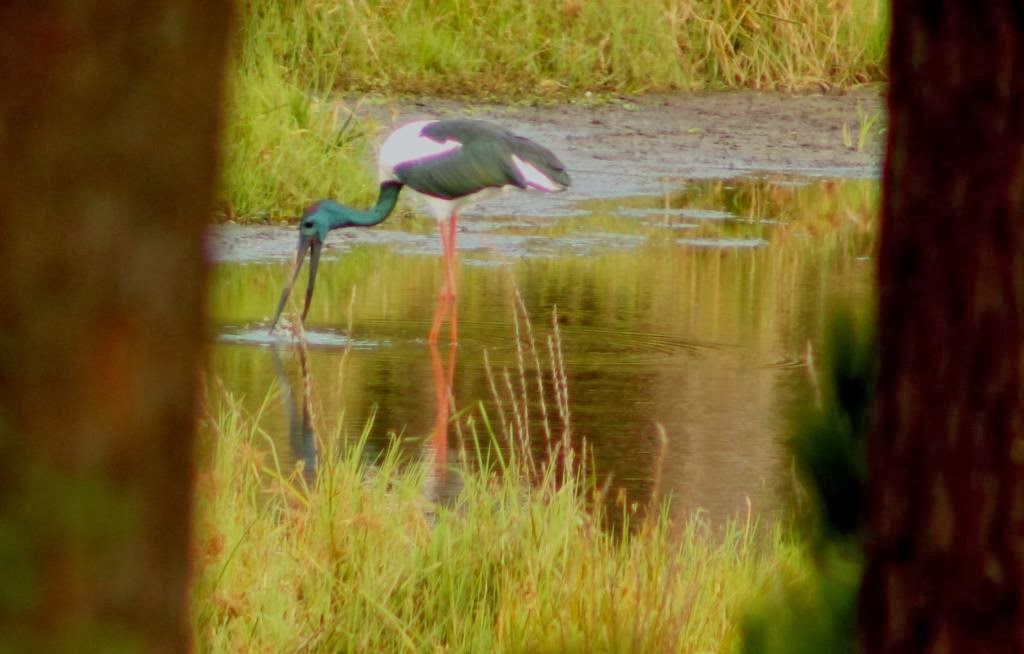 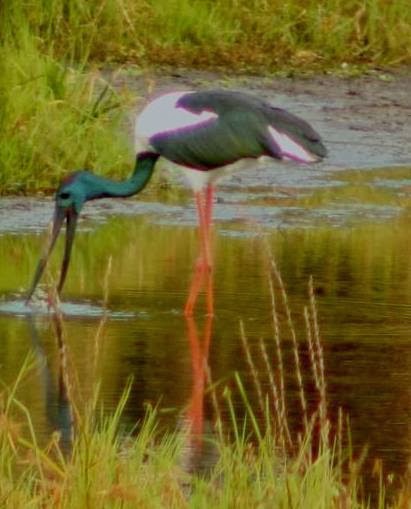 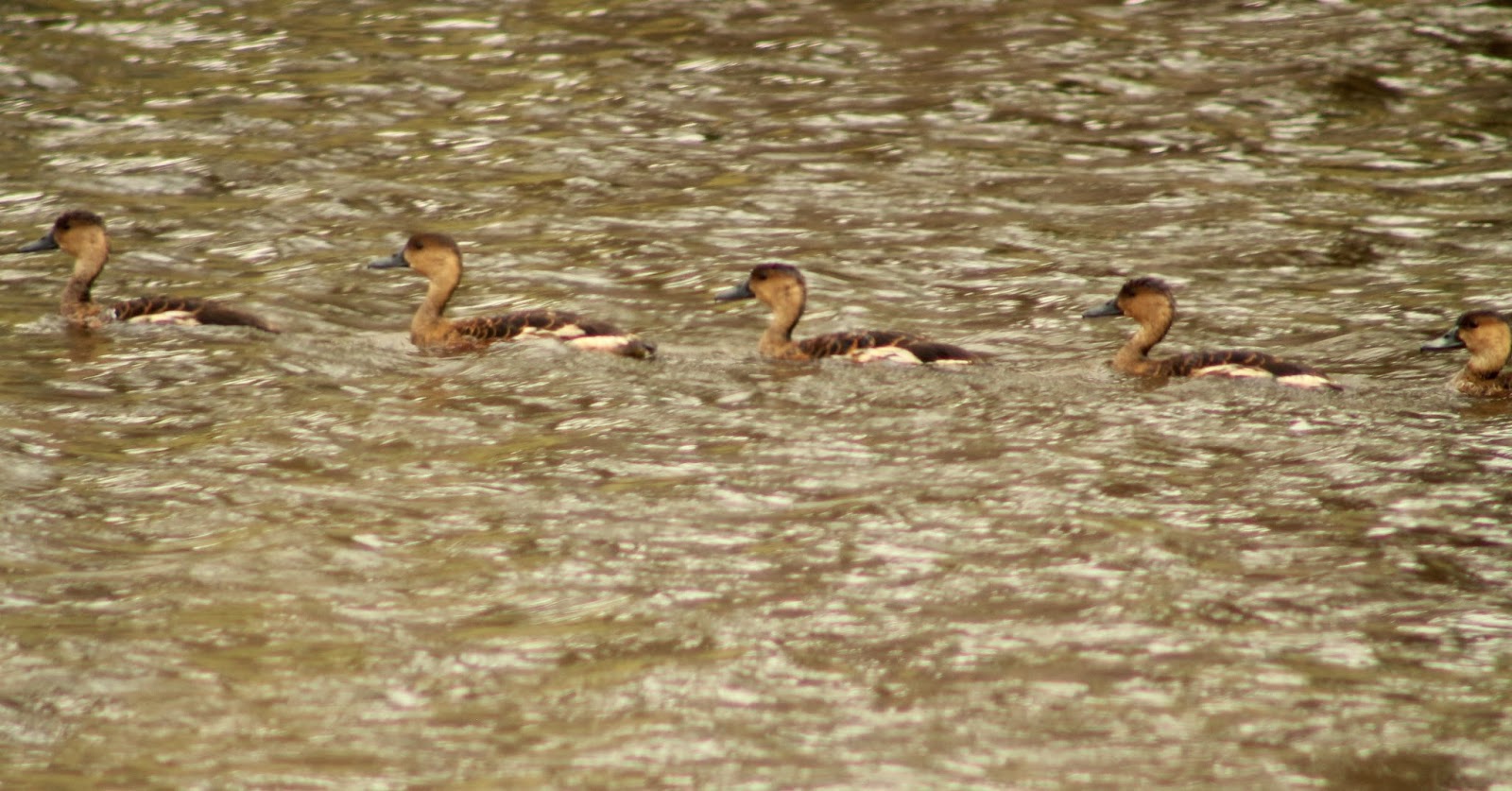 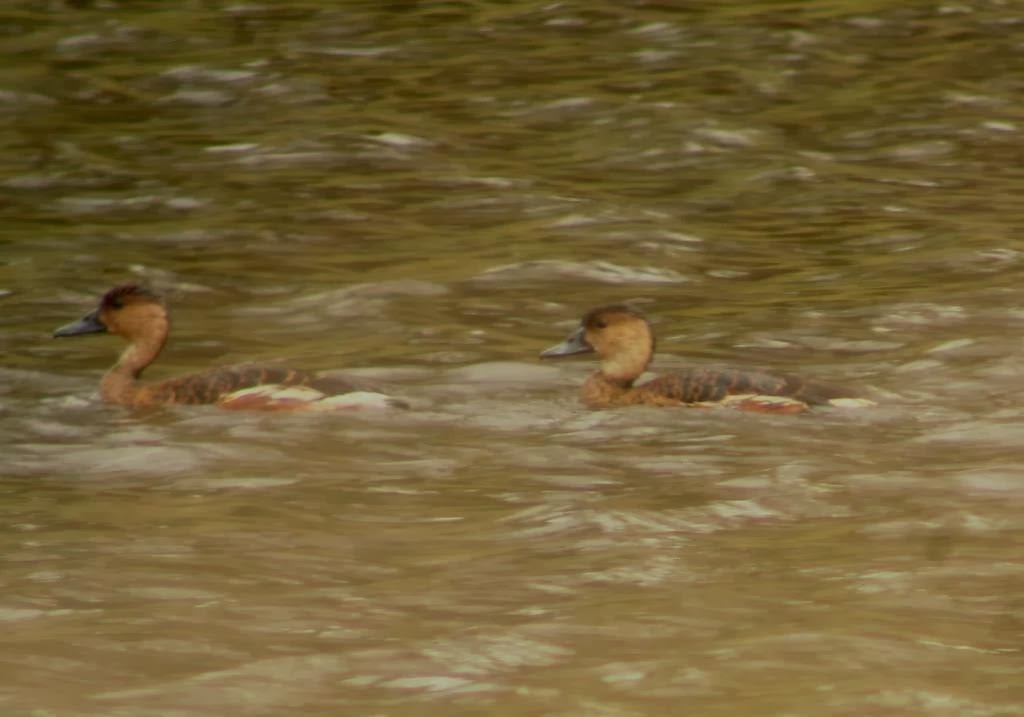 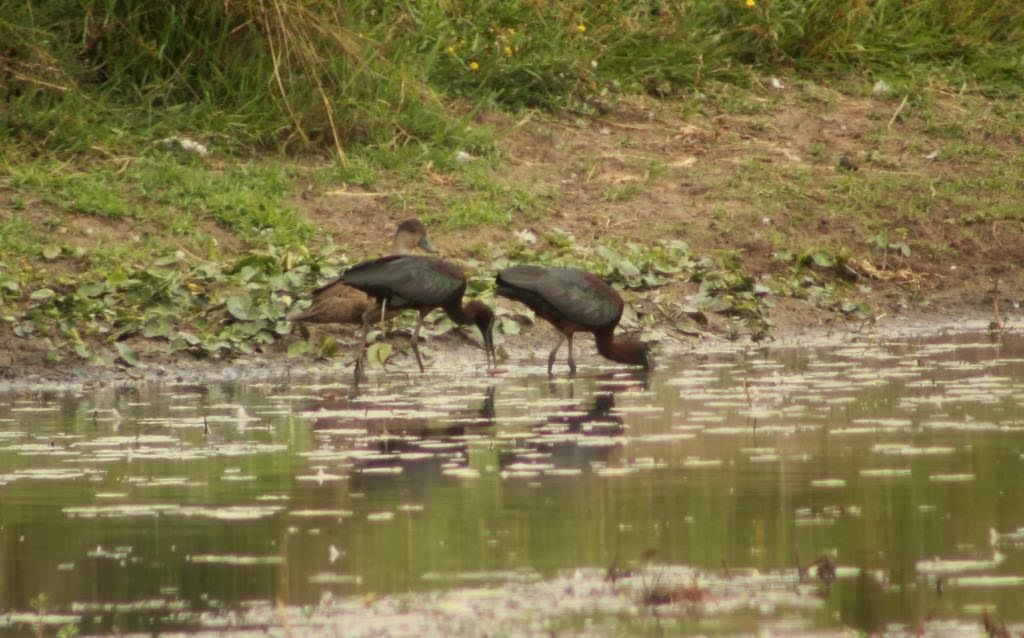 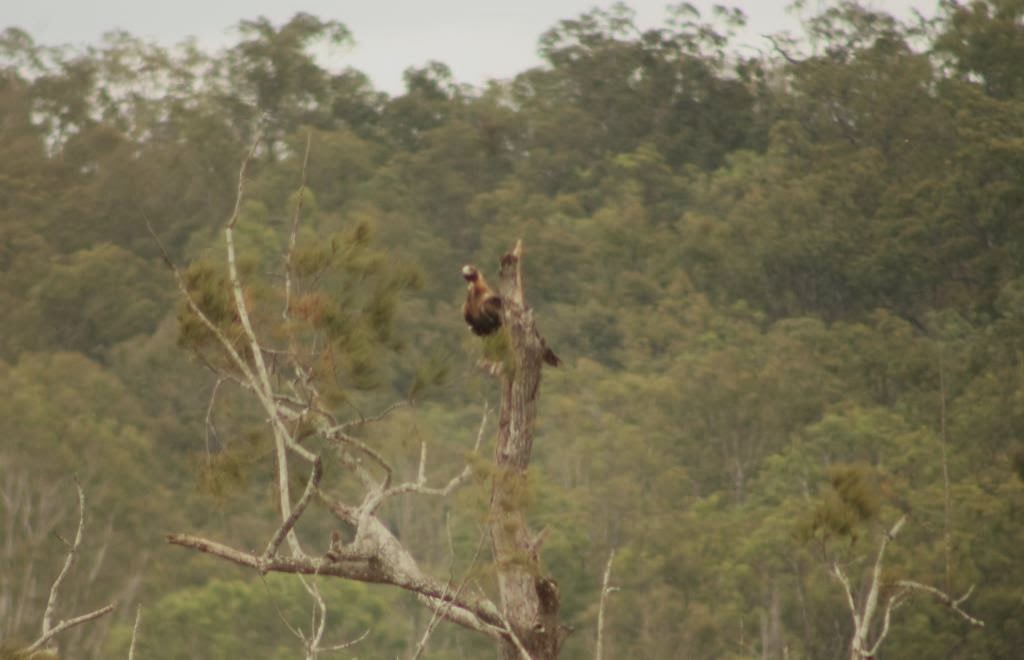 
After a turn around at Dyraaba we stopped at the Stratheden Wetland which had mostly dried up.  We did record 5 Glossy Ibis, 1 Comb-crested Jacana, an immature White-bellied Sea-Eagle, an Australian Pelican and a few ducks.

Over 100 Sharp-tailed Sandpipers, a pair of Black-necked (Satin) Storks, 7+ Glossy Ibis and 2 Chestnut-breasted Mannikins were at Round Swamp, at the edge of Casino.  We then travelled home via the Summerland Highway to Grafton and then on to Coutts Crossing.  Warren and I both agreed that it was a great day with six threatened bird species, a total of 104 birds, 3 mammals, one reptile and one amphibian recorded, and most importantly we saw the Pygmy-geese.


The total list for the day is shown below with  ‘T’ = threatened, * = introduced;