This week's east coast low that battered the coast of eastern Australia with dramatic and damaging effects has also brought some benefits.  The extremely dry conditions experienced for many months across much of eastern Australia had caused the local Clarence Valley wetlands to dry up.  Wetland birds had been concentrating on the small remnants of water sitting in a few wetlands or around farm dams, which themselves were beginning to dry out.

The low brought with it hundreds of mm of rain in 24 hours causing most local wetlands to fill.  The water flowing into the Orara River flooded out over the paddocks at Coutts Crossing.  The Orara River drains areas behind Coffs Harbour so the rise in the River included local runoff and runoff from the Coffs Harbour hinterland.

On Sunday afternoon an adult female Black-necked Stork was foraging at Deadmans Swamp, Coutts Crossing, along with a number of White-necked and White-faced Herons, two Royal Spoonbills, a flock of Straw-necked Ibis and others.  At Brothersons Swamp I photographed a Yellow-billed Spoonbill that was roosting with a group of Royal Spoonbills.  On our walk on Monday we couldn't reach Brothersons Swamp as the Orara River had broken its banks.


The cloud formations at the tail end of the low decorated the sky. 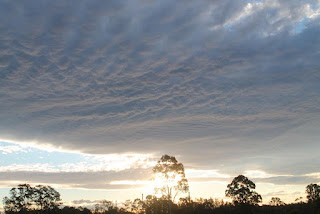 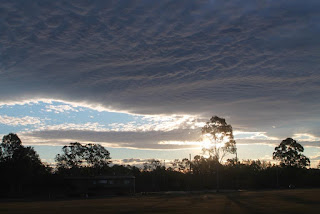 On Monday the floodwaters had backed up from the Orara River and flooded the small bridge over McIntosh Creek.


By Wednesday the River had receded but the water remained in the wetlands.   The bridge at McIntosh Creek was again passable.

Whether this dump of water will encourage our local Black-necked Storks to breed this season will become apparent in future months.  Prior to the east coast low the chance of them breeding was virtually zero.

Posted by Greg Clancy Ecologist and birding guide at 22:11